After my last mammoth post, here's another quickie. I watched Tim Holtz on QVC on Tuesday I think it was and he was promoting Ranger's line of shrink plastic and it's accompaniments....

..... as an aside, I can't stand the QVC presenters- it all seems so awkward and far too much describing of the goods and telling us exactly how many of everything is left 'in their warehouse' when of course, nothing leaves their warehouse for at least another couple of days after the show. Nowhere near enough time was spent on demonstrating.....

Of course, I've seen shrink plastic demonstrated before but somehow this really struck a cord; probably because I'm doing a project which is perfect for a little trinket or two. 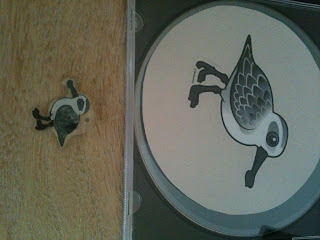 Just how adorable is that little bird!? I created my first trinket (which I can't show you just yet as it's going on my project for a present) and was so excited, I had to go and show everyone of course. Chris in jest said "can you do a spoonbilled sandpiper then?" and I said,not wanting to be defeated "yes, of course". Chris recently went to Thailand for 4 days just to see these birds as they are almost extinct now. He went with his mate Pete, so this little shrink plastic bird will become a keyring to send to Pete. I created him by tracing  the picture displayed at the top onto the shrink plastic, with a Stabilo 'Write-4-all' permanent pen. I coloured him in with acrylic paint, so hopefully he'll be waterproof. I punched a hole in the plastic and then went to heating it with my heat tool. It took longer than I thought it would to start moving around and curling and then you have to continue heating until it lies straight, then stop.
It's hypnotic! Have a go.
Take care out there﻿
﻿
Posted by Diane Warburton at 16:43