Here's another little Corinne Lapierre project I did this past week whilst I was sunning myself in Tenerife - I definitely recommend the weather there in October but I don't recommend the place we stayed at which was The Isabel, Costa Adeje but despite that, we still had a lovely time.

I did the lavender houses this time. In June I did the owl kit and loved it as a holiday project. You get all you need in the cute little brown box (you even get a needle and proper embroidery thread and a tonne and a half of lavender)  other than scissors and pins. I also found it necessary to add more stuffing to mine but that's maybe just my preference for them being fatter and firmer. I even took the extra stuffing with me in my case - I have to laugh at myself sometimes; that will have been fun to explain to customs :-) That's without mentioning the lavender seeds! 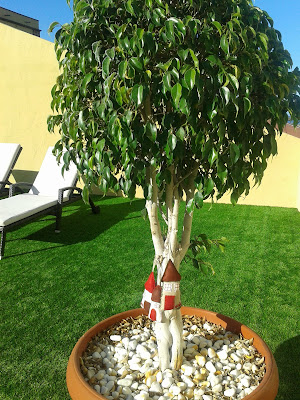 Their size is half their appeal and their ever so cute shape.


The daisy stitch for the flowers was great too, as it's a very long time since I did any decorative embroidery at all and they're so easy and Corinne gives you instructions on how to do it.


The only thing I don't like about the kit is the fabric provided other than the felt; it frays upon touch almost and when you're using thick embroidery thread in it, it is a challenge to keep it together, especially on the windows. Next time (and there will be a next time, for sure) I'll use a closer knit fabric along with felt. Actually when I had finished there was still all this lot left over: 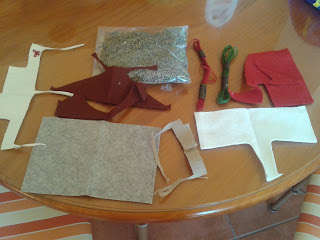 If only I could sew on flights, they would be millions times better for me!

Take care out there
Posted by Diane Warburton at 14:04 4 comments:

Here's some cards I've done recently. I did the first one and enjoyed it so much, that I did a similar second one. I knew I wanted to do black and white for the first recipient and I went straight to Sue Wilson's Particraft blog and sure enough, there I found a fab card. She does the most brilliant elegant cards and monochrome colours are a signature style of hers, in my opinion.

I used that as my inspiration and then got to cutting a pile of diamonds out, to attempt to make some sort of harlequin pattern, as I don't have any stencils or stamps with that style on. 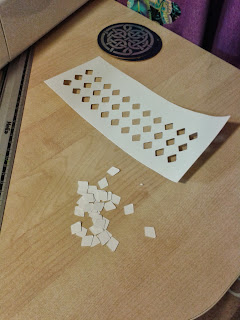 That created the top, which I had to colour black and place a white background behind it and voila; une harlequin pattern ready to be cut up into 'tails' for the cards.

I don't actually own the Sizzix Venetian accents dies, so instead I ordered them pre-cut from ebay - 24 cuts from the Venetian motifs and accents sets for only £1.80. Job done! I am now very tempted to get the dies though, as they're gorgeous - I LURRRRVVE that mask! I'll put it on my Christmas list and drive my mum mad, as she always says " but why don't you get something nice for yourself?".... which part of 'these dies are amazing' doesn't she get?!!! :-)  Only joking, I love my mum to the moon and back but she doesn't get my crafting side at all. 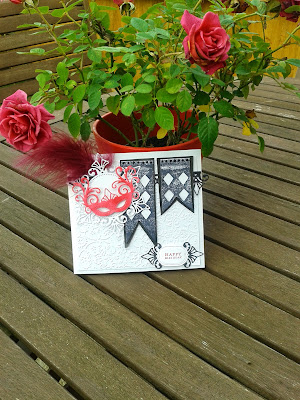 I was so happy to find a sentiment stamp which fitted perfectly onto another one of the Venetian accent dies. I also had the feather in my stash and the embossing folder. I finished it off with some drops of Cosmic shimmer glossy black pva, in the form of drops along the top of each tail.

The second one I made in almost exactly the same way, other than I used some black ribbon to tie two pieces of card together to make the card base instead. I also coloured the mask in a different shade and placed the border strip in front of the tails instead of behind.

I love these cards and I hope Sue likes the fact that I used her cards as inspiration. If they inspire you to make your own take on this, please send me photos and I'll post them on here for you too.

Take care out there.
Posted by Diane Warburton at 06:00 4 comments:

Yes indeed, I find myself in rather a peculiar mood. I'm going on holiday to Tenerife on Saturday morning. I'm usually a mega fan of going to sunny places, as three quarters of the time I can't stand the weather in this country and how it affects my lifestyle. The weird thing is that I'm not that excited about it. I keep thinking about all my projects I need/want to do. I've been busy with other stuff recently, so my projects haven't been taking pride of place in my schedule, as I'd like them to do. Truth to be told, I'm also not enjoying the mega cleaning I'm having to do, as my mum and step dad are coming to look after the house and the dogs. I feel like stomping my feet and saying ' I don't want to be an adult, I want to play!!'.

What I'm meant to be showing you (rather than having a whinge about going on holiday?!!!) is the coaster set I've made for Linda of The Crafty Network fame, as she was my first liker of my brand new Facebook page for my brand new enterprise 'A Place to Set'. I was determined to squeeze it in before going off on my jollies and I've managed it! Hip hip hooray! Linda asked specifically for a burgundy red Christmas theme, so hopefully she thinks I've managed that. 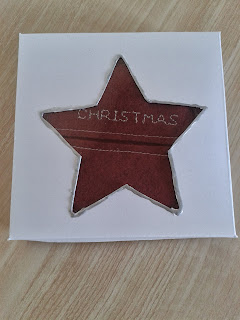 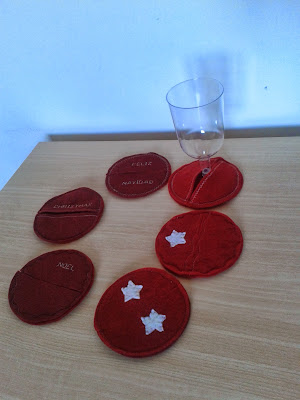 Along a similar theme, Linda posted my latest 'A Crafter's Journey' article onto The Crafty Network blog. Nip over there for a read and let me know your thoughts, either there or here. Is there anything you think I could be mentioning in these articles? What in particular do you think is needed on that site or on my page?

One other project which has taken some time recently is the halloween 'bunting' I've made for work. It hasn't turned out quite how I expected. The main reason for that is that I did some free cuts on Cricut Craft room but then they expired the next day (they give you a week free trial of a cartridge a week), so I couldn't do anymore. I'm not prepared to pay for a halloween cartridge, as I don't really like it. I also ran out of time and also it's for a Sainsbury cafe, so I'm hoping that enough 'official' stuff can be used in there. I had felt sorry for the cafe team leader, when she said they didn't have any decorations for in there and they're not allowed to dress up themselves. The bunting will hardly be visible at all in the large space but hey, at least I've tried to help someone out, which is what life should be all about. 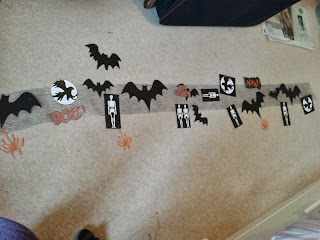 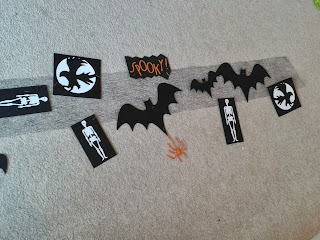 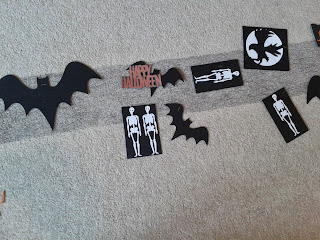 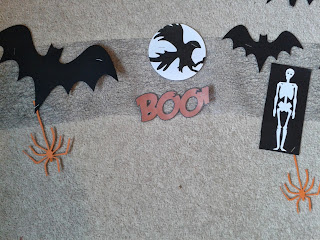 The items are placed onto some spider's web net, which is actually white but I just rubbed a black archival ink pad over it to make it the right colour for the theme.

Now I just need time to nip round with it for them.

The sun is shining now and although I have to get back to the boring cleaning stuff, at least I've crafted by proxy of writing this blog post :-) I'll enjoy the holiday once I get there but it's just all the faff of organising everything before I go and let's not mention what happens when I get back but hey, all you ladies know all about the holiday related stress.

Take care out there, especially if you're going on holidays! :-)
Posted by Diane Warburton at 14:00 1 comment:

One of my favourite people

My baby is 15 today, although I'm writing this on October 12th whilst she's out at a friend's house; I've scheduled this post for October 15th. We had a fab trip to Harry Potter World at the beginning of October and she's getting a big present, so she's going to have yet another good birthday hopefully. 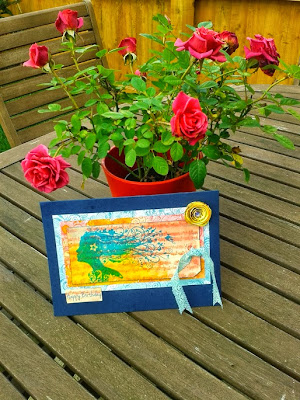 Unusually enough, I don't normally make her a card but I have this year.

I've used the Juliet stamp by Indigo Blu for the first time, despite having owned the stamp for a very long time. I looked online for inspiration but found only three examples of cards using that stamp, which is surprising. I love the flowing hair behind her and the birds and swirls; very liberating and pretty. I used a tag project as the inspiration but mine looks nothing like that.

I first inked the tag by putting three distress inks on the craft mat and spritzed them with water and ran the tag through them - very technical; that's me! I did the same for the second layer but only using the wild honey and worn lipstick. The base layer, I only used the broken china. I then used the swirly stamp from the Indigo Blu 'music hall' stamp in matching colours on the edges of each of those two layers and used the musical score stamp, from that set, on the main tag. I stamped Juliet with SU's tempting turqoise.

The flower is a washi tape one, which I really like. It has musical score on it, so very fitting for this card.The lace is a SU lace which I dyed with some spray ink. The sentiment was created some leftover musical score practise stamping I did. I had to do a couple of tags before I got to this one, which I was happy with. 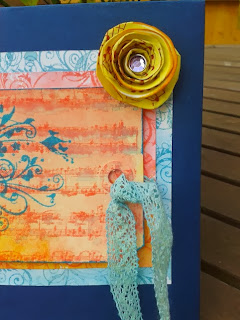 The flower meant that I had to make a box, as it is quite raised - oh goody!
I mean that, as they're easy to make with my Ultimate Pro. 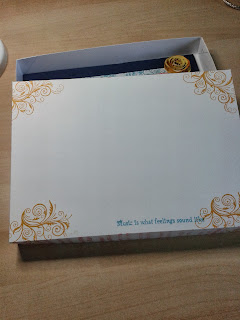 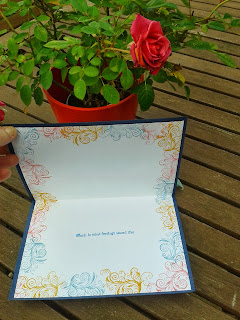 I did the insert the same way. 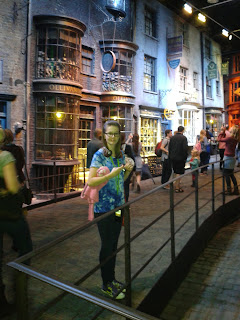 I really enjoyed this experience.
Let's hope my baby likes it too.

Take care out there
Posted by Diane Warburton at 16:00 4 comments: