Please welcome the star of the show – (cue music and loud applause!)

Before you, you miraculously see my very first Grandma’s flower block.

Yer, you can clap again now! 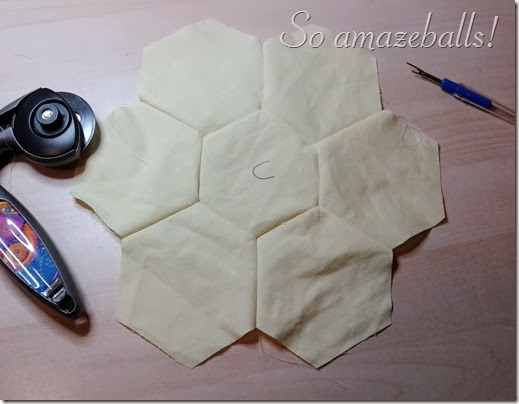 As you can gather by now (I know, I can be rather too subtle sometimes!) I’m rather happy about this little girl. I have been trying so many different ways of cutting and sewing hexagons this year and they are one of my main techniques I want to focus on this year. Hexagons and dresden plates to be exact.

I have patchpassion.com.au to thank, as I watched her youtube video and it worked. End of.

I have to run now and eat dinner but I will eat with a smile on my face.

Take care out there whilst I try to eat whilst smiling with my mouth closed, as I do have manners, don’t you know!


Here's a post about something quite different to the norm; although you may well ask, what exactly my norm is? My norm is usually different every time! :-)

A few months ago I bought two fabric panels which I saw on the internet; they're Riley Blake superhero panels. My intention was to make Christmas presents for two little boys who live in New Zealand. Unfortunately all my best intentions were smashed, as I was just too busy to get them done. The boys won't know a thing, as they get loads of presents anyway and they've never met me, so I'm hoping Megan; their mum, has forgiven me. I've just finished them both and thought I'd show the world as there's very little that comes up on internet searches about these actually sewn together.

First of all you just cut all the panels out. I also bought some extra blue fabric, which enables me to make the cape double sided, which is fun but also practical, as it keeps the edges clean and makes it feel more substantial, which I think it will need to be with two toddler boys. There are instructions printed onto the panel too, which are helpful but not brilliant, especially for newbies I would've thought. I also added batting inside the mask, belt and wristbands and belt/wristband emblems, as that helps to make them sturdier - it also allowed me to quilt the lightening strike on the belt emblem, which I like. 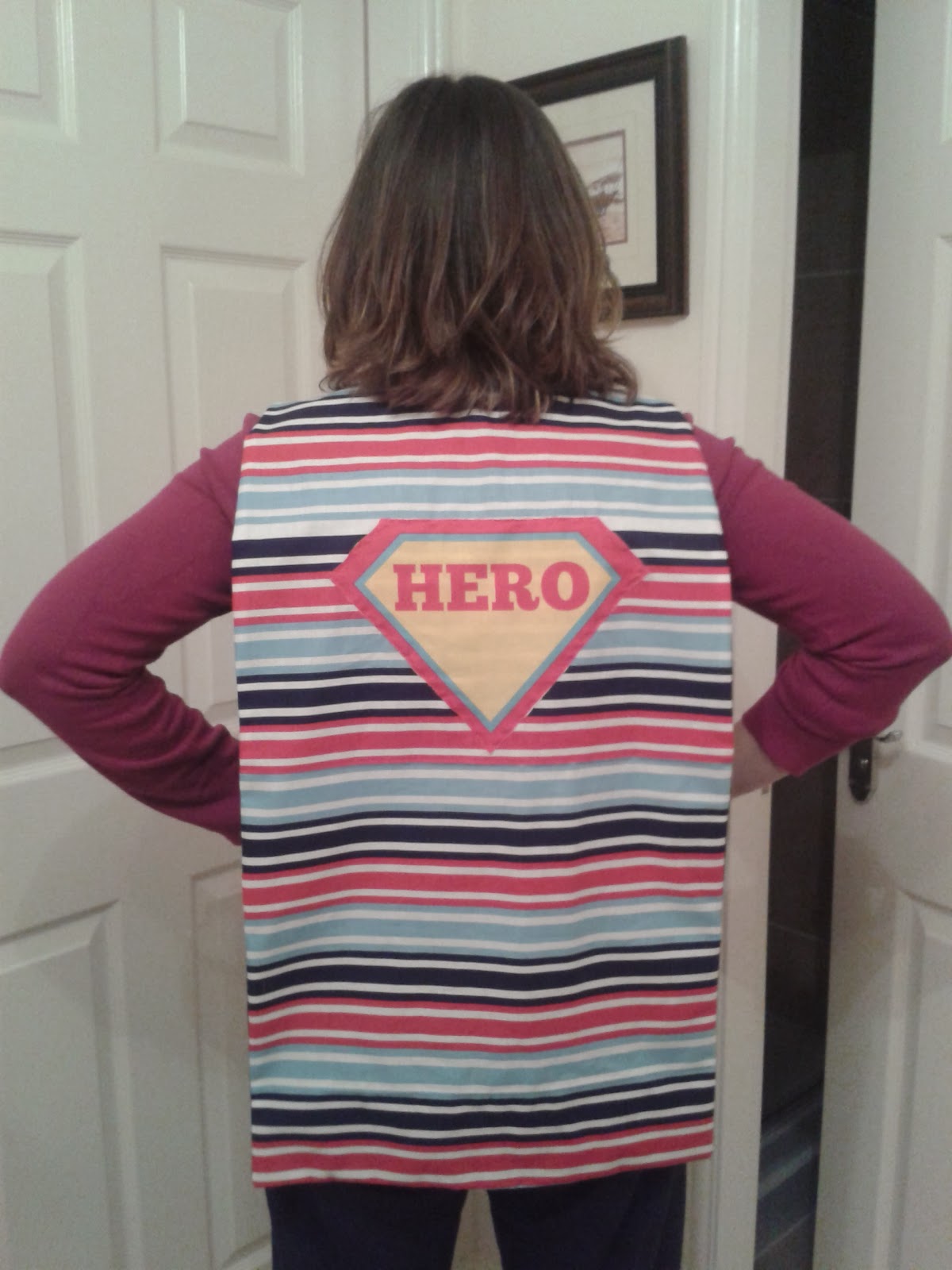 A few pointers for anyone reading this; looking for extra advice, are to remember to sew the cape emblems on BEFORE sewing the pieces together. I would also recommend sewing the velcro pieces on BEFORE attaching the emblems or it will be very difficult to sew them on afterwards, without ruining the emblem. Don't worry too much about the waist measurements for the belt, as it'll be better for it to be too big, as you (or the parent of the child) can easily put a tuck in the back and put a few stitches in there. Young kids don't want to be spending ages getting things on; they want them NOW and easily, so if the belt is slightly too big, it'll give them that quick accessibility. 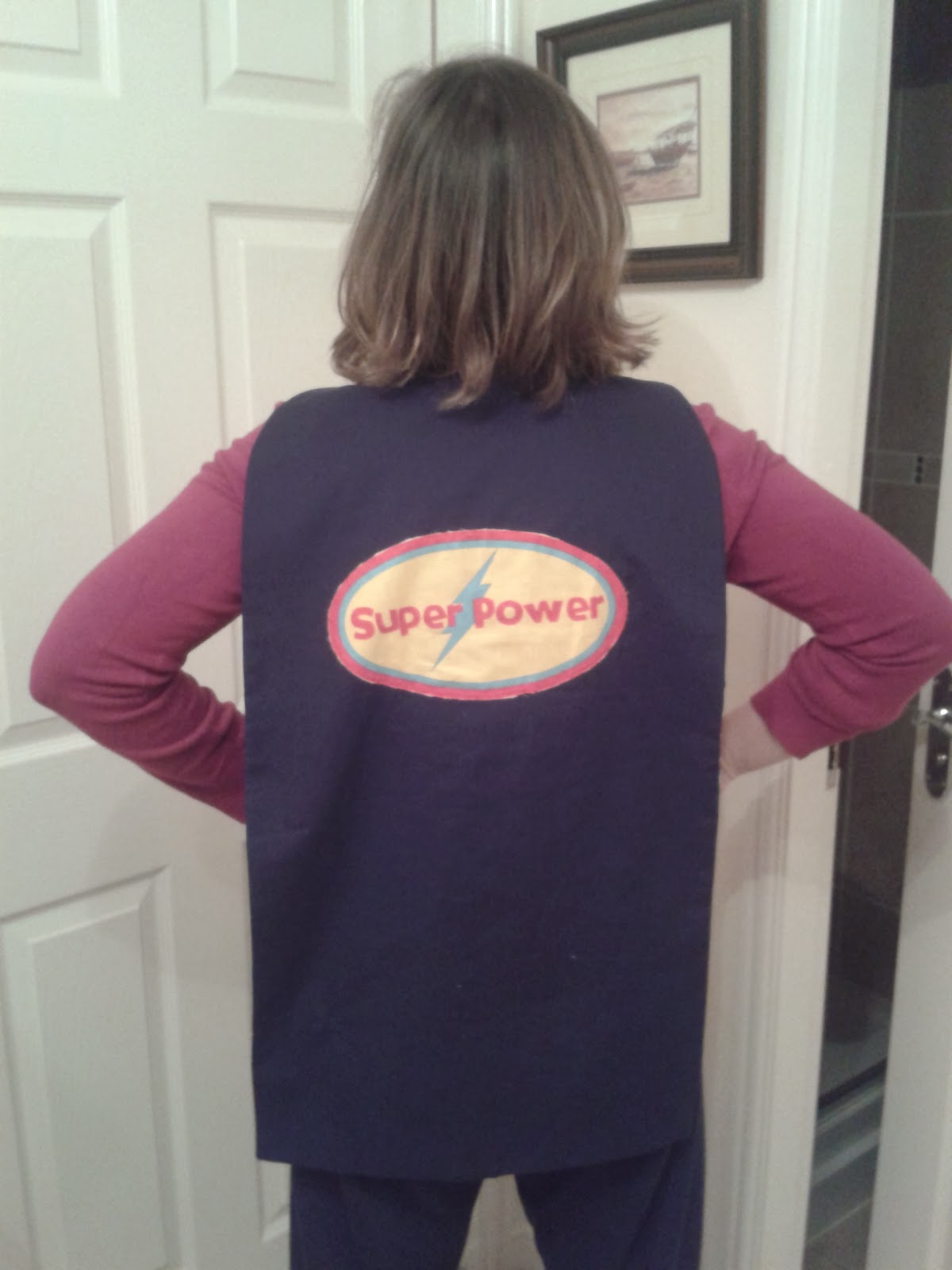 I was going to embroider the names of each boy on the back but then thought better of it, as now it doesn't matter who wears them (friends who come round to play), they won't cause fights over who wears which one (although that can never be guaranteed) .  Also when the boys have finished with them, I'm hoping that Megan will pass them on to some other children to use, if they're fit to use as Bentley is only almost 2, so there's a good few years to go before he's finished with them hopefully. It'll probably be too big for him but as the good old parenting adage goes; 'he can always grow into it'.
You'll notice (if you pay proper attention - well, are you?!! :-)  ) that I've done the masks differently and the wristband emblems. This is because I learn from mistakes (sometimes). The first set of wristband emblems I did, I joined the pieces together right sides together, left a short gap in the sewing and then turned them out and sewed up the gap. I wasn't really happy with that, as it hid some of the points of the 'pow' and 'bam' flashes. So with the other set, I sewed them wrong sides together and zig-zag sewed the edges. 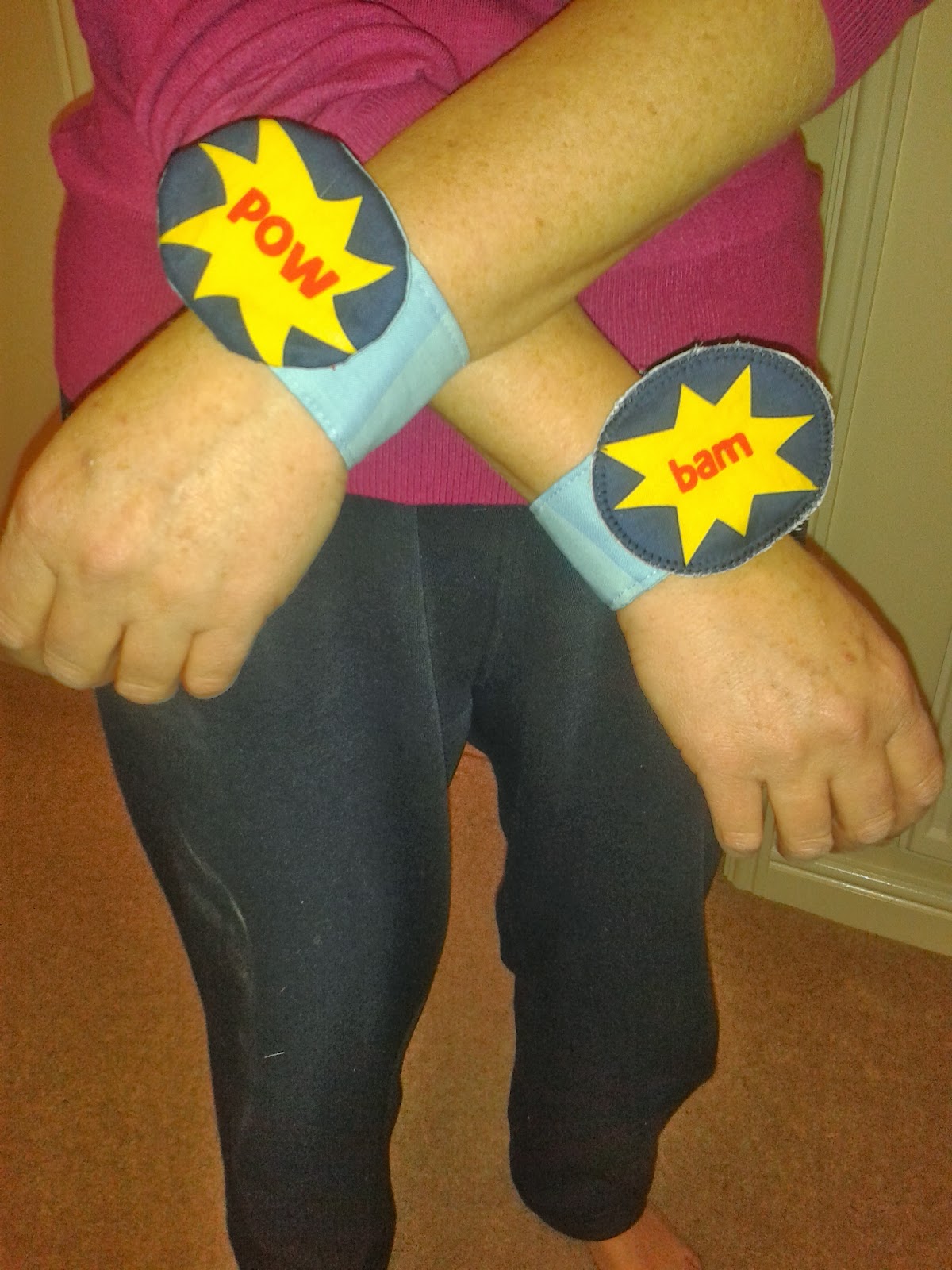 If you still have questions you would like answering about these capes, please don't hesitate to ask.

I'll post them on Monday then wait two weeks for them to get to N.Z and then see what Megan and the boys think of them - wish me luck although I think they're pretty cute but toddlers can be discerning critics.

On another note this arrived today and got me excited - 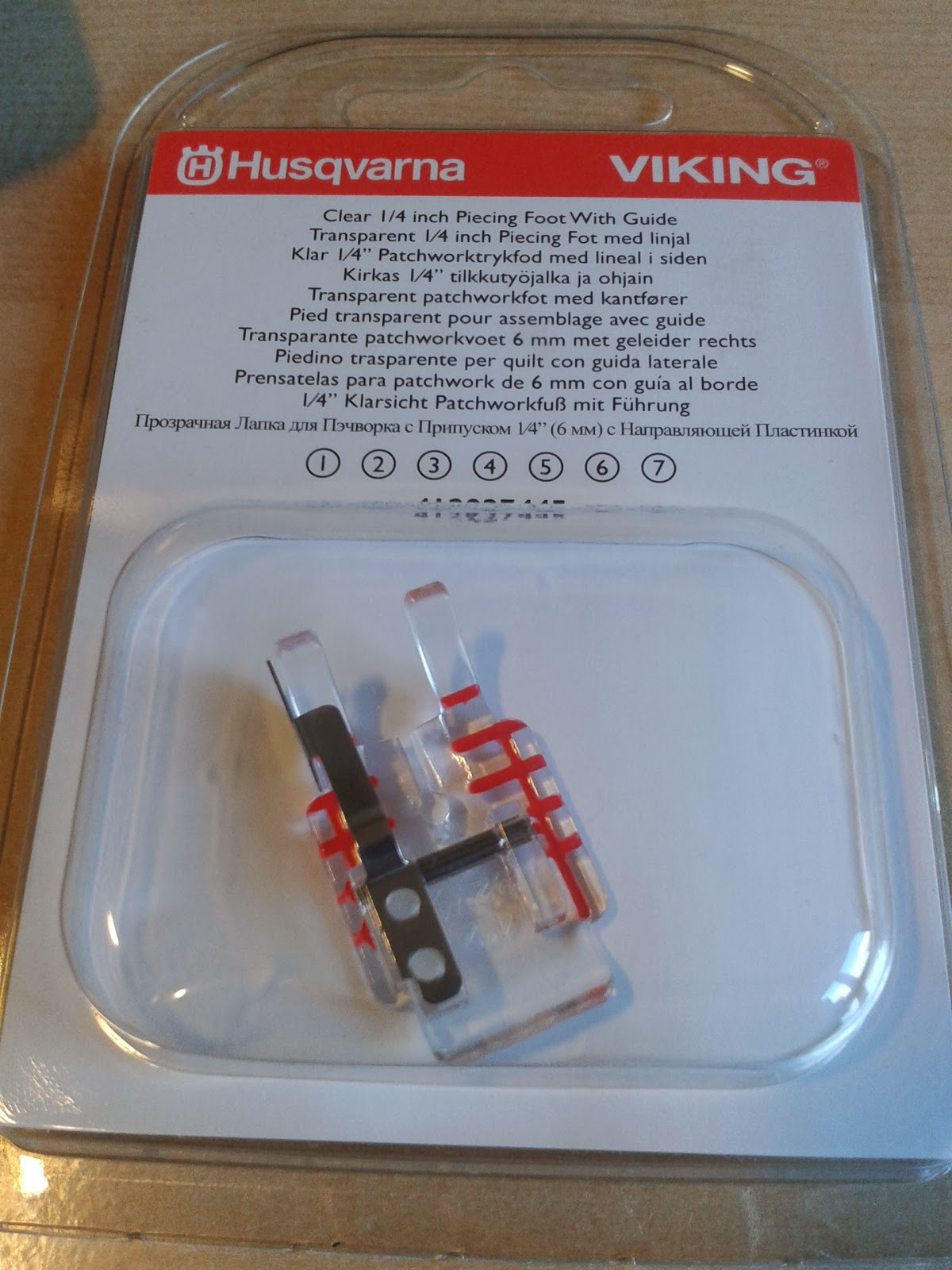 and an ironing/cutting mat and this selection of yumminess amongst a few other goodies.

The machine foot is going to help me piece my hexagons so much easier than I managed on my first turn with them the other day. The fabric is what I'll cut my hexagons out of and this: 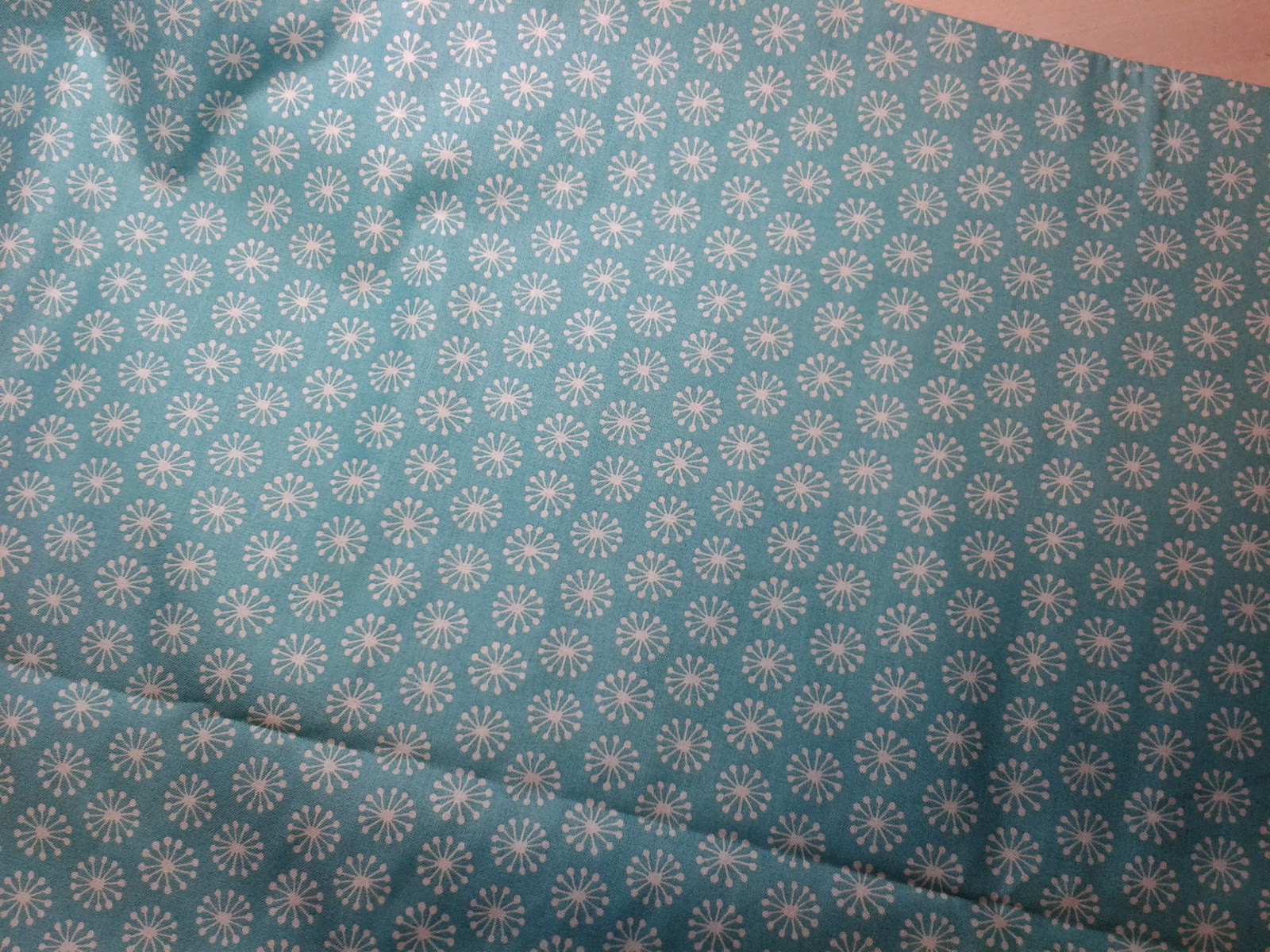 is the fabric I'll use for the backing of my quilt I'm going to make with all those hexagons. That's the plan at any rate; let's see if I manage it within not too long a time frame.

Next on my list though is a placemat set which uses hexagons. I'm hoping to get them well on the way by next Saturday which is 'crafty Saturday' meet-up, as I need to have the hand sewing bits ready for me to do then, as taking a machine there just isn't an option.

Take care out there and appreciate the little stuff

Should I or shouldn't I?

Well I did wonder whether or not to actually write this post, then I thought, 'pride be gone'! One of the things on my 'to-do list' this year is sewing hexagons. After thinking about it for ages at the end of last year and watching videos and reading tutorials online, last night I finally took the plunge to actually sew something. 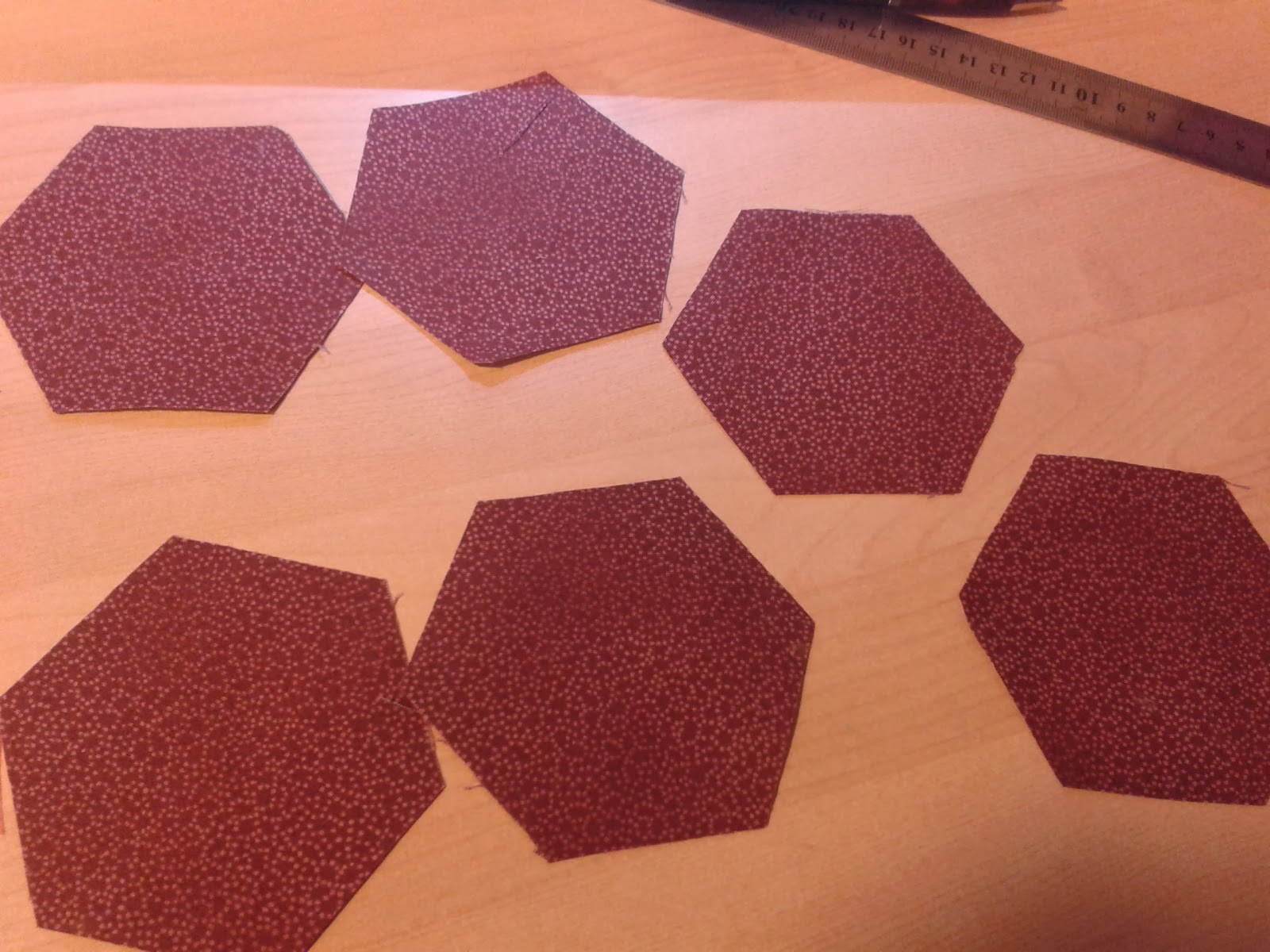 I used a template I got from 'material girl quilts' although I did also try one I found on ladyharvatine's blog. I really could do with one of those cutting mats which turns round, as cutting out hexagons with a rotary cutter on the floor, is a bit like playing Twister, when you have a stagnant mat.

I then proceeded to mark some 1/4in points, which help me to know where to stop and start sewing at the different intervals. You can't just sew along hexagons for fairly obvious reasons. For that exact reason, you would not believe the resources out there for sewing these babies; tools, hints, tips, accessories and patterns - it's a minefield. 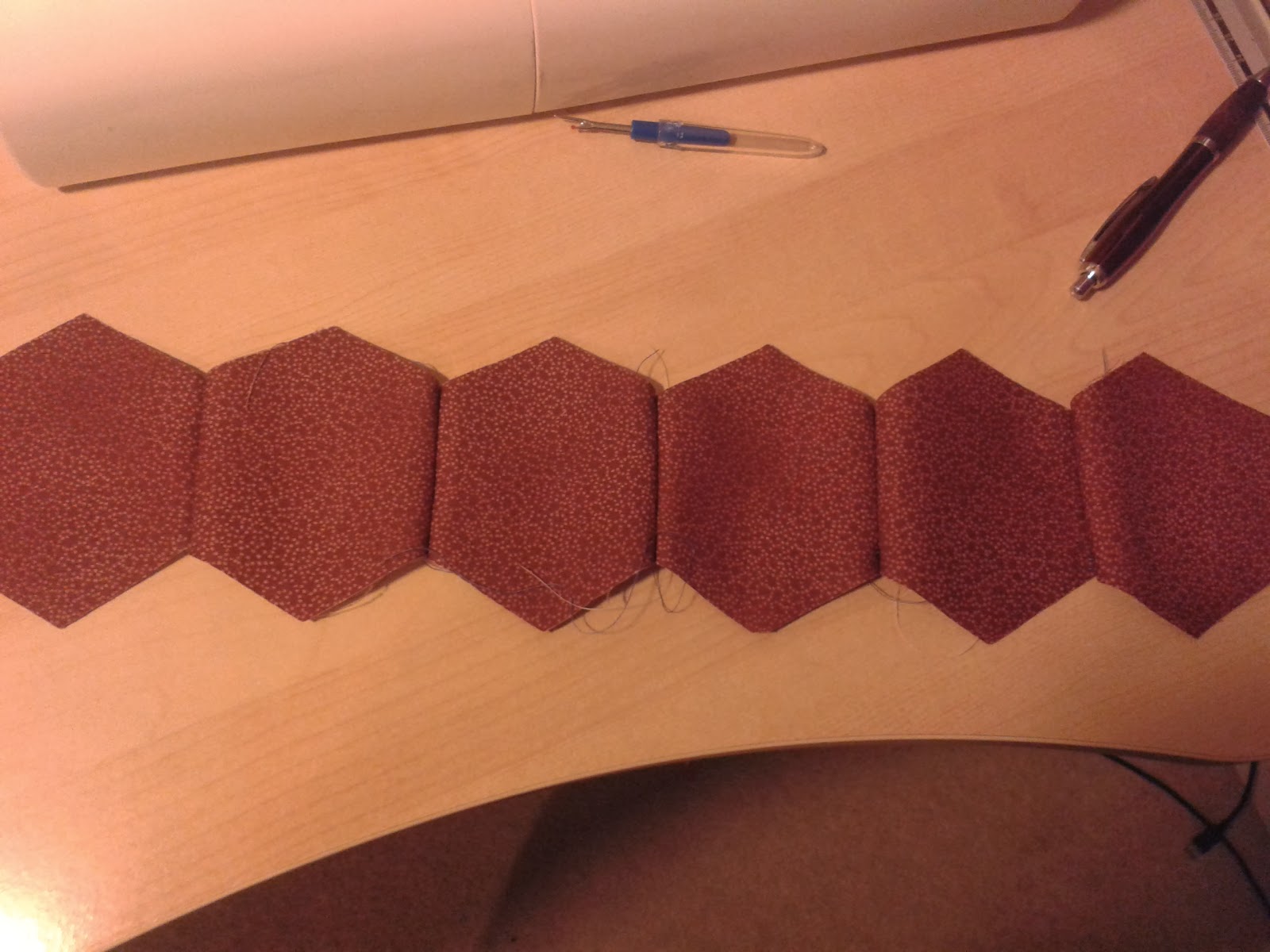 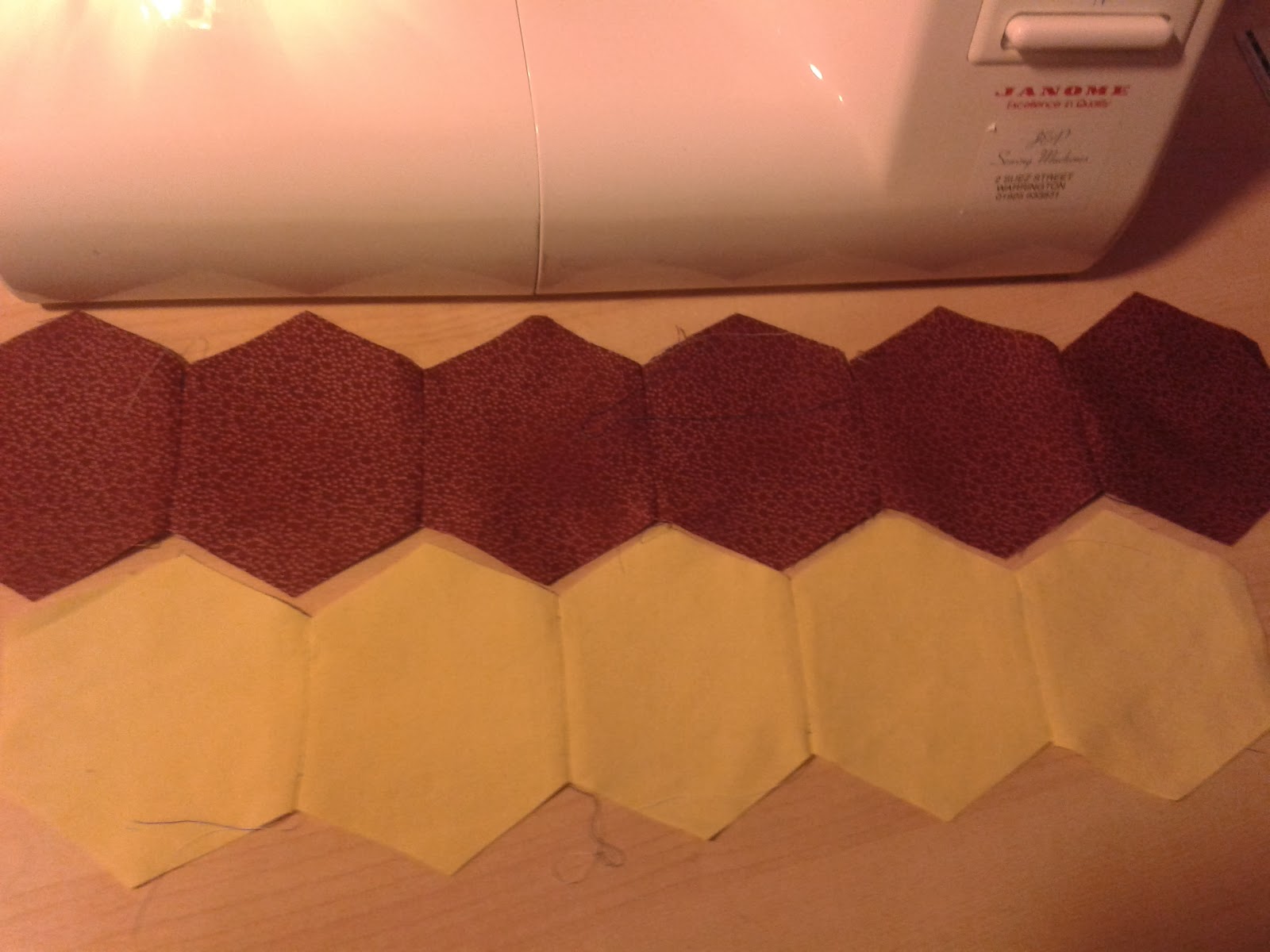 Each stitch line between each hexagon has to start 1/4in down and I had to stop sewing 1/4in from the bottom. That's alot of marking and then I found that my 1/4in foot on the machine, isn't alot of use as I couldn't see the marks! Duh! Not alot I can do about that at the minute but I am considering a method I saw to help with that, which involves putting tape all over my machine to show me where to stop stitching - heck of a lot of faff it has to be said.

The two rows of hexagons is where I reached last night and then I had to stop, as I'd been up and working since 5, so was very tired.

Today, inbetween doing allsorts of other stuff, I actually managed to sew those two rows together. Are you ready to be amazed? 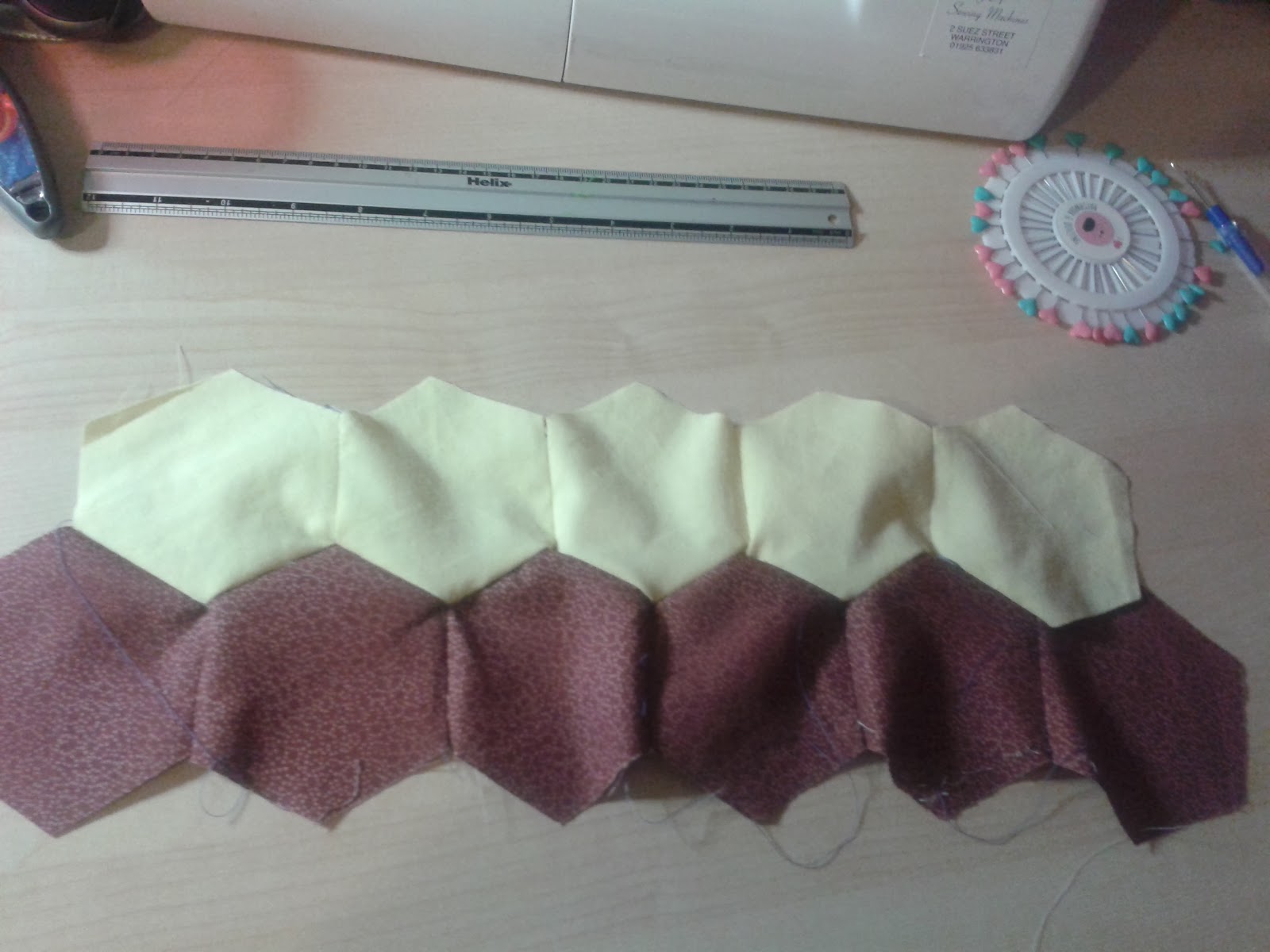 If so, I recommend you go elsewhere for your kicks, as this bit of sewing is not amazing.

It might not be amazing but I'm dead chuffed that I've managed it at all. I had to undo a couple of bits I did to start with but then got into the swing of things. I know that the thing I need to work on, is the 1/4in seams, so that's achievable. I have a couple of ideas in my head and one involves freezer paper, which I'm hoping will arrive tomorrow.

Come back again soon to see if I can amaze you then, as I failed you today :-)

Take care out there.
Posted by Diane Warburton at 17:30 2 comments:

In the middle of 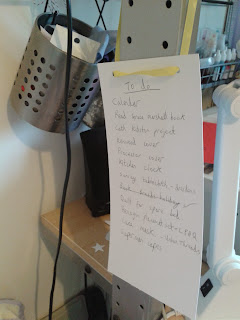 Alot of people's blogs at the minute are all about what their highlights of 2013 were. I'm not big into that as it can lead to thinking about regrets; I'd rather think about what's ahead. What's ahead is daunting; I have SOOOO many ideas floating around in this head of mine, that it's almost stressful. My daughter looked at my latest 'Love Patchwork & quilting' magazine yesterday and said " how on earth can they find enough to talk about just quilting?" She clearly doesn't get it at all but I do! The magazine has tonnes of ideas in every month but barely scrapes the surface of possibilities. I have a hobby to last a lifetime. My 'to-do' list is a joke really, as I don't put half the things on there that I'd like to do; those are really the 'must-do's'; mostly because they're things I've been meaning to do for months/years or they're things I've been inspired with lately and they're hot on my mind, so to speak.


Actually I'm even getting distracted from writing this post by making up an order on The Cotton Patch for some fabric called Henna by Makower which was on their Facebook page recently on a fabric face-off. Henna won hands down - go have a look why or maybe you disagree.

Now, where was I?

Oh yes, I was telling you about my crazy head full of ideas for sewing but actually I'm here to wish you all a happy New Year of course and also just to quickly show you a papercraft project I'm in the middle of. It's the yearly family planner calendar project. I don't really enjoy this that much but it is a lovely thing to have in the kitchen and to help us remember good things from the year before. The reason I don't enjoy it is because I hate doing the calendar bit on MS Word. I've hunted high and low for years but can never find a template for a family calendar, so I have to create my own, which is mega boring. This year though, I've cheated and bought a calendar from a supermarket once they'd gone on sale (£2.15 isn't expensive) and I've ripped off the photos on the top section and replaced them with my scrapbook type photo pages. Much easier and quicker and less of the boring. 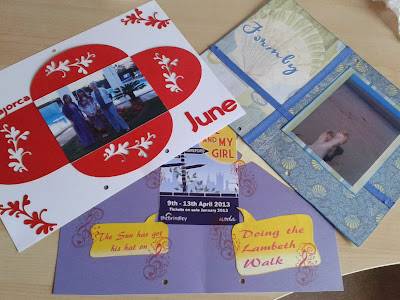 There's just a few months to show you the type of thing I mean, although if you've been reading my blog for any length of time, you'll know this as I show it regularly but for those of you slackos who haven't read my blog for a long time, here's some posts I did about last years' :-)
http://diwarli.blogspot.co.uk/2013/01/im-complete-jumpstart.html

N.B I decided not to do Creative Jumpstart this year, as I'm sewing more these days and I just physically can't fit anymore crafting in; unless I lock myself in my room for months on end and don't eat or get any fresh air or meet any people ;-)

Anyway, I'd best get back to doing more calendar pages and nag Chris into choosing his photos for his month, which is May.

Take care out there
Posted by Diane Warburton at 14:26 1 comment: