The Valentine's table I had wanted was actually finished on time. It was all set at 4p.m and dinner is at 6, so I'm a happy girl right now.
The table started like this:
Now look at those placemats. You would think that they were ancient when you see the stains on them. They're only a couple of months old from Marks and Spencer. They're rubbish basically as the coating allows moisture under the edges and wrecks the appearance.

Hopefully you recognise the napkin box from a previous post.

I got the roses from Chris this morning after he'd given me breakfast in bed - what a surprise that was! 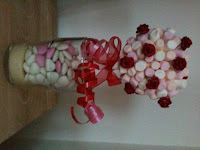 Next thing to go on the table was the sweet tree made by Joanne Taylor - please do visit
Jo's website for loads more goodies.


After that was the cookies which my daughter and I made together. The chocolate hearts were a lucky find in the cupboard. I created the heart shape on a couple of the cookies just by putting a cutter on the cookie and putting some icing in there and let it just fall into shape - I thought it was ingenious; much easier than using an icing bag :-) 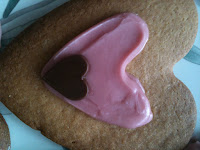 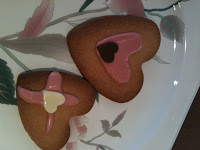 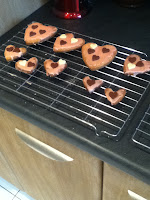 ﻿
Last but not least, came my placemats and coasters. After finishing the placemats, I was a bit stuck as I didn't have any of the bias binding left and to be honest, I wasn't keen on hand sewing more of that on as my finger was hurting as it was far too narrow for this project really. I've just seen the Simplicity bias binding and cord maker on tele and I NEED one NOW!! :-) It's on 'special deal' now too, so some contemplating to do in regards to that tonight.
..... as usual, I digress... back on track......

I nipped online for some inspiration with the coasters and very quickly came across the Fat Orange website which has a pictoral tutorial on making almost exactly what I wanted to make. After seeing how to sandwich the layers together - the batting goes at the bottom; which was a bit of a surprise to me as I'm a batting novice. After that I was off and running! Ta dah!! Finito! 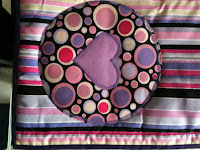 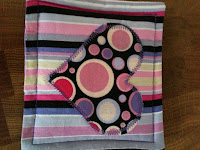 ﻿
You can never have enough pretty things. After all this, Chris doesn't eat with us on a Tuesday as he goes to tennis but Maggie, Fiona and I were able to enjoy it and Chris enjoyed the surprise when he got home.
Take care out there ﻿
Posted by Diane Warburton at 19:13