The fire went out

It's now Friday 20th January and so much for me being on fire; think someone must've thrown a bucket of water over me as I haven't done a thing for last three days. The weather hasn't been great i.e pouring down with rain and windy, so that's possibly to blame. I suppose none of us know why these complete creative freezes happen.

I haven't done anything with the dressing gown as since it's been cut into the pattern pieces, it drops bits of material everywhere as it's a fluffy material, so that's a pain in the neck.

I've just realised, after looking around my room, that I'm not being completely fair on myself.
Fair enough, the dressing gown is still in the same state as it has been for a week but beside it, is a book a friend of mine has suggested I read for a real giggle; a Dawn French book called 'A Tiny Bit Marvellous'. Beside that is part of an art project I'm helping my daughter to do and over that is some tissue paper and the delivery note from an Art From The Heart order I received this week with loads of great goodies ready for my May Flaum BPC class which starts in February. 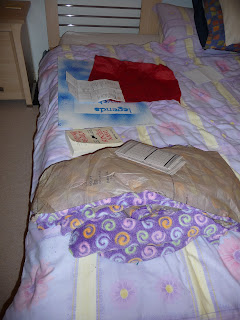 So all in all I've done more than I thought. The stencilling for the art project wasn't completely successful but since it's for the background, we're going to cover over some of the worst bits. We sprayed it outside on large plastic sheets, so as to stop it getting wet and to stop Maggie spraying it all over the furniture. It was freezing out there! Bless her, she goes along with these crazy ideas of mine.

I also practised a different form of stencilling with the actual letters which were created for the stencil we sprayed over. I created the stencil with my Cricut, cutting through acetate as I don't have the fancy 'proper' stuff. ( Lyrical letters cartridge, jumbo function size 1.5 inches).
Maggie also needed some material letters to make the name Eric Tournaire, whose work her art project discusses; so I cut those with my Cricut, with some of the material left over from making the curtains for this craft room/guest room. She's going to sew them onto the project. I'm really quite pleased that she's trying so many techniques but also sees the need for things like the fonts to be the same size and style for continuity in the design. I'm also loving her enthusiasm for it. 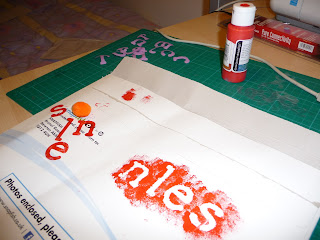 I now feel much better as I have actually achieved things in the last few days; just not as much as I think I should be. I have achieved other 'none crafty' things today and yesterday, so perhaps it's time to stop beating myself up.
I also had treatment on my right foot yesterday, which is now quite painful to walk on, so that has probably affected my mojo.
Ok, enough is enough. There's only so much muttering I can expect anyone to read.
I'm off to start the Dawn French book to give myself a break and a giggle. Hope you can do something similiar too.
Take care out there﻿
Posted by Diane Warburton at 20:38