You never know what you'll find

A few weeks ago now, my daughter and I went to a glass fusing class - I bet that's the last thing you were expecting this post to be about! She had shown an interest in glass when we had a visit to our local museum over the summer and when I saw this advertised at The Sewing Sanctuary in Thornton Cleveleys, then I just had to book in on it. This isn't as easy as it sounds, as it's an hour's drive away and it was on a school night but sometimes you just have to bite the bullet. 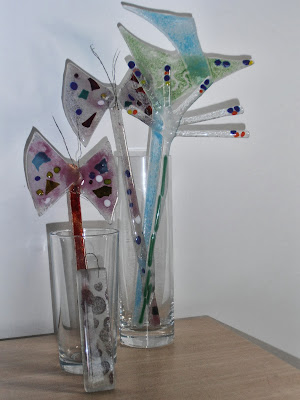 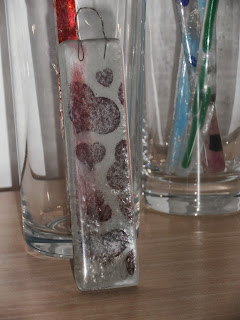 Courtesy of traffic we were slightly late arriving, so we were thrown in at the deep end a bit and didn't get a chance to attune to the environment, so to speak but we did ok and had a nice time working out what to make. Maggie was brilliant, as it was a room full of adults and yet she just carried on regardless. There's such a choice of things you can do of course and yet with our complete lack of experience, we plodded along as best we could. There were some lovely examples of clever glass work around the place. 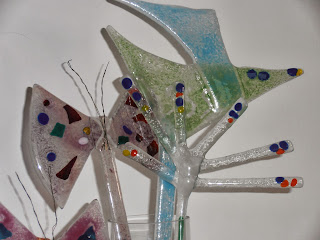 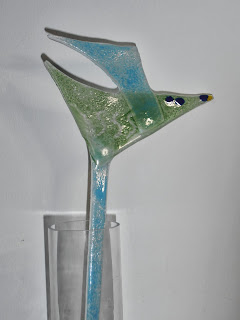 We left our little creations there for the lady to take home and put in the kiln and I collected them a week later. One of mine I threw in the bin, as the colours inside it were all washed up instead of displaying the stencilled images I had tried to achieve. All of Maggie's were fine but I especially love her bird.


Whereas my flower looks a bit like a alien hand :-) 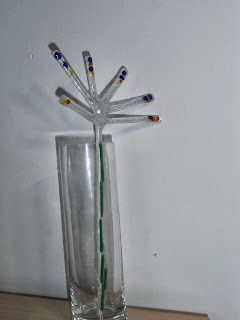 The light used for the photos doesn't show them at their best but I struggled to know how best to capture them.

On the way home we passed John Ditchfield's Glasform studio with it's amazing huge glass structures on display in the field's around the studio, which was brilliant to see in the dark all lit up and changing colours. After our little workshop, we appreciated the skill needed to create such a project. 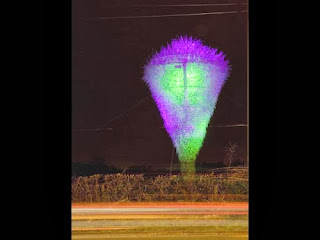 We also have a glass museum in St.Helen's which is close to us and we've yet to go there, so that's next on the list.

Take care out there and check out your local craft shop and see what classes they have available, as you never know what surprises they may have in store.

Posted by Diane Warburton at 08:29