More of the Craftseller magazine embellishments and papers

As promised in a post a few days ago, here's some cards I made using the embellishments and papers which came with the issue 15 of the Craftseller magazine. 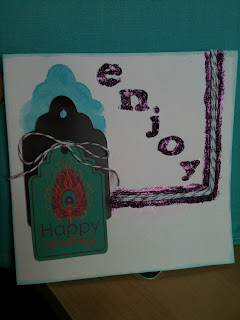 This card started off really well. I thought almost immediately of having the tag embellishment from the magazine layered onto a die-cut larger tag and that on top of a stencilled inked tag. I used plum Baker's Twine as the bow. I learnt that Hunkydory silk art card die-cuts like a dream - why I haven't learnt this before is another point altogether! The stencil comes from the negative of the diecut tag - I LOVE using the negatives and positives of die-cuts, as it makes it feel like I'm getting more out of the paper stock; makes it feel more of a creative process.

Then I got stuck.

I had the three tags on the left hand side and didn't know how on earth to fill the big white space on the right. I was also tired after having done my first two early shifts back at work after being off for almost a month. ..... excuses, excuses, I hear you!

It took my poor little muse quite a long while to slowly create the result, for better and worse. It'll become clear in a little while!
I thought of using Baker's twine again to create links with the tags and then realised I needed to form a link from the left to the right, so just took a piece of Baker's twine from the right of the tags and took it straight across. NO! Far too boring! Instantly I just dragged the twine up instead of just across. YES! I like that. I added two more pieces to enable it to show up more and used light blue as well to tone in. Unfortunately the glue I used was playing up and it ended up going far too wide from the twine. At that point I was ready to throw it away. That's defeat though and I can't have that, now can I? May Flaum has taught me to never give in; there's always a way of hiding mistakes to enhance your card further. To this end, I decided to add more glue and glitter around the twine.

There's a reason I don't use glitter alot; I can't stand it! It gets everywhere! 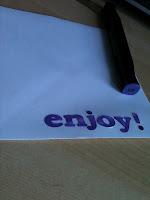 Anyway, use it I did and then thought of putting the word 'enjoy' in the space still available. Nothing for it but to glitter those letters too - groan!

This card came about as the bloom dots embossing folder I'd ordered arrived and I 'had' to play with it. I instantly used it on the blue card which has been floating around, so to speak, lately. I then matted the tag embellishment with coordinating card. I used a strip of the patterned paper (which is actually meant to be a sentiment on the other side but it fitted almost perfectly onto the embossed card) as another element and matted that onto more of the patterned paper from the magazine. I then used some pearlescent card as the card base and used my Crafter's Companion Clever Cut to make the vertical edges scalloped and hey presto, there's the card! 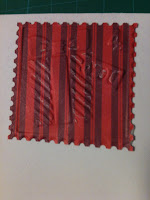 I did more embossing and some die-cutting on a small piece of matching patterned paper to create the stamp for the envelope.
I'm much happier with this card as there's NO glitter anywhere in sight :-) 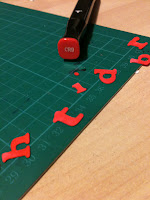 I have really enjoyed making these cards, despite that first one taking much longer and being far too fussy. This last one was fun in particular as I used alphabet spaghetti i.e die-cut left over letters.  I also got to use the new brads and ribbon which I got as part of my Stampers 15 club; which is a Stampin' Up club.
Spectrum Noir colour CR9 used for these letters. 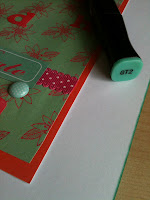 I used Spectrum Noir colour GT2 to edge the card base and to colour the letters for the envelope. 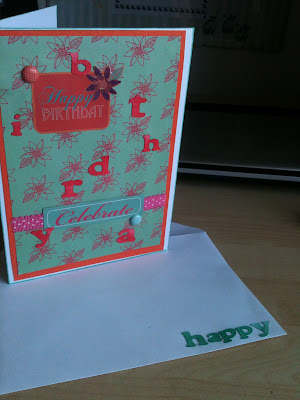 If you get the Craftseller magazine, I hope you enjoy creating fun stuff too with the freebies and put a photo of your creations on their Facebook page.