Here's a birthday card all of my own. I didn't look through books and magazines for inspiration. I haven't seen a card demo which has inspired me. I just used my own inspiration from this: Yes, that's right; a scrap of paper left over from some tags I've cut out in the past. From this I thought that I could line up three on the left, then go down to two tags and then one large tag with the sentiment on. So off I went to play and practise and loved it. 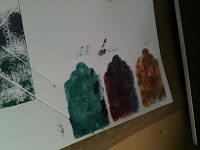 The photo on the left shows what I ended up when messing around with my Big and Juicy, mountain meadow pad = not good but that pad was tipped every which way during the house moves I had to make in one year, so not sure it's much good for anything now but I'm not throwing it out.

I finally decided on Wild Honey distress pad and it all rolled from there. I applied it by stamping onto my craft mat a couple of times, sprinkling a bit of water on and then rubbed my blending tool into it and then rubbed that onto the card covered by my improvised stencil. Easy! I also coloured the large tag that way.
I then decided to make the second layer out of die-cut tags (size 6.5cm from Plantin Schoolbook) and coloured them with brown sugar dabber by Jenni Bowlin and gold Adirondack dabber. I've actually made two of these cards; one lot of tags had a gold base with brown splodges and the other vice versa. 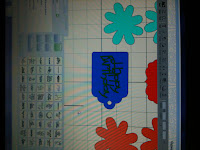 I used Wild Card cartridge to cut the happy birthday sentiment from (page 61 of booklet). Using the Craftroom made it so easy to match up with the large tag and get the size exactly right. You're able to cut layer by layer, so as long as you put the selected icon onto the 'mat' as a separate layer in the first place, it makes cutting just one part of the overall image, extremely easy. 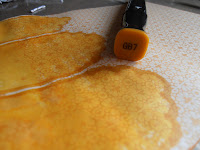 I dabbed around the large tag with the gold dabber.
Outlining the inked tags helps give better definition to them.
The backing paper is from a K&Co paper pad I use alot as it's HUGE!

With a bit of help from Baker's Twine: 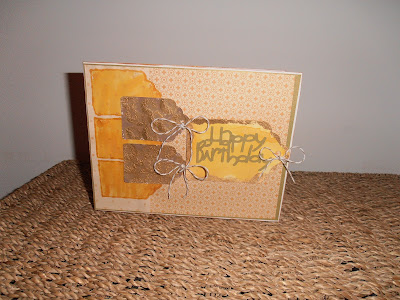 I had the idea to emboss/deboss a tag image onto the envelope to put the address into; it's from an embossing board which came with my Crafter's Companion Ultimate Pro. Love it!

Take care out there
Posted by Diane Warburton at 14:03