Hello there
Yes, my mum is now 70 but she's very lucky in that she doesn't look it - me and my sisters can only hope it's in the genes, although some days I think I look older than that already!
One of the things I did for her was make a cushion cover. It can't be classed as a present as such though, as she chose and paid for the material but I finally got my act together and made it in time to give her on the day. I have a range of old missmatched cushion covers in this lounge, which is inexcusable really as they can be so easy to make and make such a difference to a room. 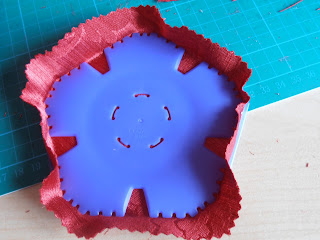 I found a quick way to get the size of the circular cushion cover on the patternreview website, so that was quick and easy and I just did overlap closure.

I used the 'large' Clover yo-yo template. They don't turn out to be what I would call large but suppose they are bigger than the small. I'm not 100% enamoured with them but they just worked out ok with the material I had. You get a full set of instructions with them but I've made a few alterations to make them work for me.

﻿
One flower definitely wasn't enough though, since it's the same fabric as the cushion cover, so I did three in the end. 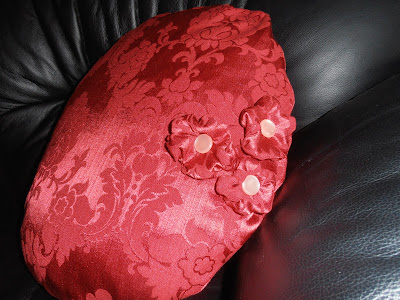 I'm still not happy about the shape of the cover as I should've added the 'belt' I made for it to put between the top and bottom layer. I may well pinch the cushion off mum to add that at a later date.

Take care out there﻿
Posted by Diane Warburton at 07:00