Sometimes I wonder why I bother ...

... and then something just snaps and I KNOW why I bother; 'cos I love it!

This morning for example I had a real faff (that means 'a hard time' for all those who don't understand that colloquism) with trying to make an envelope. Nothing was working and even when I tried printing with MyCraftStudio, it kept printing it A6 when I wanted it A4. When I finally phoned up, I was told that Microsoft's latest update has affected alot of software users in this way. The advice given was to 'print to file' and then print from there but my computer was having none of it. I even downloaded a template from '4shared' but that wasn't 5.5in square either despite what it was advertised as.

Sometimes I wonder why I bother with computers but then our lives are so embroiled in them, it's extremely difficult to forget about them. In my crafting, my computer can be extremely useful for printing allsorts of things; using CricutCraftRoom and getting inspiration and instruction too. There are times, I'd gladly throw it out of the window though.

Had enough of my ramblings about computers? Don't blame you. Let's move on. 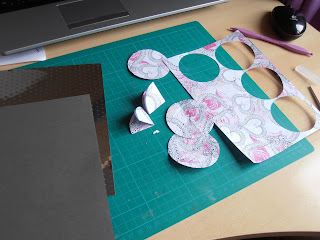 I had wanted to use some papers out of a special edition 'Weddings' magazine that 'Cardmaking and Papercraft' did last year I think it was but very annoyingly I couldn't find it. They do have a wide selection online that you can download but those were amongst them, of course! I did find this loveheart paper though which I think it quite pretty. I then did a basic layout of what I wanted my card to look like and got printing and searching for stuff in my room.

By the way, the theme for this card is SILVER WEDDING!

It's actually my very very first commission (aaargghh scary!). It's an order from a friend for a friend, so I hope and pray that they both like it. 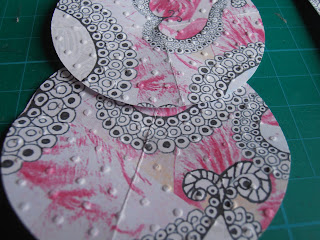 I cut circles out of the two patterned papers I chose - the largest ones (4)were 2.5in and the smaller scalloped circles (4)were 1.75in. An extra 2.5in circle needs to be cut from card to form a base for the quartered flower I made with the circles. I also put the larger ones through a swiss dots embossing folder to link in with the dots on the design. You just fold the circles in half and then in half again and then glue them onto the card base.
The card blank was cut with Cricutcraftroom in order for it to join properly - flower1 at 15.42 x 28.75 (then folded in half) from Sweet Treats cartridge.
The first mat (dotty mirri board) - 13.48 x 13.55
The top mat - 11.5 x 11.5
Add a button; embroidery thread twirled within an inch of it's life; some text created in CraftArtist; an insert which took me far too long to import into CraftArtist from being a pdf and then fading and you end up with an anniversary card. 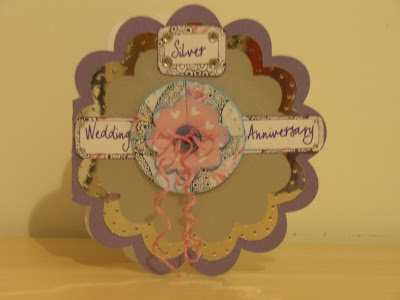 Then came the envelope antics but I got it sorted finally with a few adjustments of measurements using my Ultimate Pro. Before you suggest it, yes I did keep a template. I used to have a few but they've got lost with the house moves. With some cutting out of hearts from the paper as well and hey presto, an envelope appears. 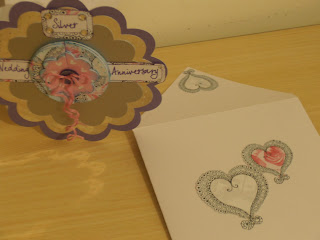 After making that though, I was nervous about whether it would be liked and because I'd had so much bother with it, I decided to make another different card. That post is for another time.

Until then.. take care out there﻿
Posted by Diane Warburton at 10:50