Yes, I feel it's a crisis when in the last couple of weeks, my Gypsy has broken beyond repair or replacement as Cricut won't touch it with a barge pole because I didn't  buy it from Ideal World. I then downloaded a new software from Cricut called Classroom which gives you all the functionality of the Gypsy, without the portability which wasn't any use to me anyway. Last night, that said that my Expression needed a firmware update and (cut a long story short and hopefully less boring) now I have an Expression which doesn't work. These tools have been at the forefront of my creativity for 18 months and I'm now feeling rather uptight and stressed, frustrated, annoyed and many more things besides. I was on holiday last week, so I didn't 'craft' at all and this week I haven't done a thing besides try to work the Cricut issues out and I'm craft starved and it's driving me insane!!! Grrrr

Ok, after taking a calming breath, I will continue. I have so many birthdays this month and Christmas of course and I'm feeling way behind. Just quarter of an hour ago I decided that I had to do something, so I got some magazines out and just made two little very basic 'paper' cards as I call them to try to make me feel a bit better. I do, although the cards will only go to Maggie's friends who don't care about cards really. The only vaguely interesting thing I did was spray 'Spray and Sparkle' glitter on the sentiment tags. 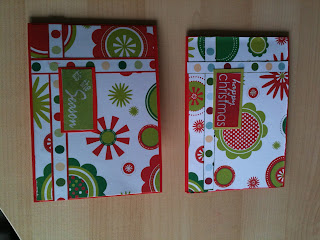 I now also feel a tiny bit  better because I've found out that Maggie's brand new 'made by me' pyjama bottoms were found at the cottage where we stayed last week and he's going to post them back. Big relief although they're not fancy pyjamas but it's all part of me feeling useless and if they had been lost for good, then I'd be depressed that my efforts are all coming to nothing.
The card below is one I made a few weeks ago for my step-daughter's son's first birthday. I've had so much hassle trying to work out how to make a 8in/20cm square envelope and all the Cricut nonsense that I still haven't sent it and his birthday is on November 10th and he lives in N.Z. I also like to make the interior nice but even my software items (seeing as I can't do anything with my Cricut!!!!) are causing me bother but I think that's because I'm getting too wrapped up in it all and not concentrating properly. 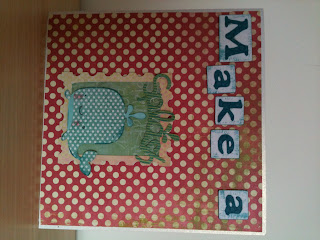 ﻿
﻿
﻿Thanks Melyssa Connolly for the inspiration anyway in the Cricut magazine but boy will I be relieved when this card is sent.
Right, off I go to take the dogs for a short romp before I get my hair cut and basically on with the day.
If you've managed to read through all these 'mutterings' of mine; thanks.
Take care out there.
Posted by Diane Warburton at 13:47