Here are the stages I went through to make an advent calendar. I got the original idea from Sheila Weaver in her tutorial for the Joanna Sheen newsletter this month. I can't afford to buy the Nostalgia collection Christmas cd so I've had to make alot of it up myself, including the little pictures behind the doors.
I will direct you to the actual page on Joanna Sheen's page as I don't want to get into trouble for copying anything - Advent Calendar by Sheila Weaver. You will need to read that to make sense of my instructions and that link will help me for next year, if I want to improve on this year's effort. Here's my adaptation:
I used images about 1 inch square for the little images behind the doors; I got them from C.A and paper stock. I then laid them out fairly randomly on the A section of the 3 section layout and took a photocopy of it; so that I could cut the doors out of that as a template to create the doors on the main picture. 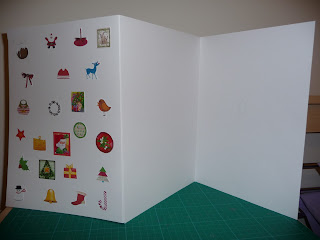 As per Sheila's instructions, put foam tape inbetween the pictures; randomly again is fine as it's purely needed to raise the main picture away from the small icons. I used the template to place over the main picture and I used a clear star gellyroll pen to mark around the 3 edges of each door onto the main picture - see below: 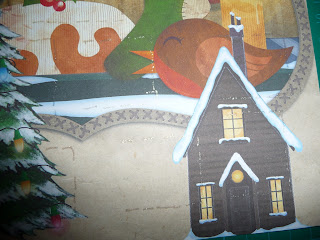 The reason I suggest a nice pen like the clear star is because you can still see it on the finished item. Use a craft knife to cut along the lines, obviously remembering only to cut the three sides on the right. I then used my Cricut and Plantin School book (PSB) cartridge to cut the numbers for the doors- 3/4inch size. I had to use Lyrical letters for the 4's though as the card stock I was using was quite thick and fibrous and the PSB design 4's kept breaking. Glue them on randomly then glue the main picture over the base with the icons on it. I would suggest using card for this main picture, as the paper I used makes the doors rather flimsy. 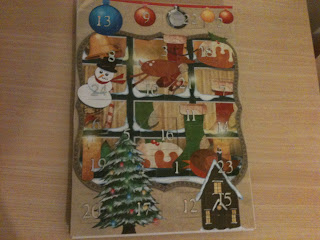 Now for the inside of this advent calendar where the goodies will be stashed. It's a different design with this  calendar to the 'norm', as you reveal the picture under the doors on the front and then you go to the inside to find the correct little box to get to the chocolate- just think of all those extra calories you're burning off with the extra effort, so you can have more chocolates later as well!   The little boxes seem difficult but they're definitely not - I even measured 1cm for the flap to tuck in on the first one I made- that's excessive to say the least as all you need to do is cut off the pointed end of that top section, so that there isn't too much to tuck under; I just made sure it was wide enough for my tape runner to dash over it before tucking it in. I'm going to put a photo of some of the papers I used as I like them and I created the one with the deer, house, robin on the bottom of the photo (with C.A) and I rather like it. 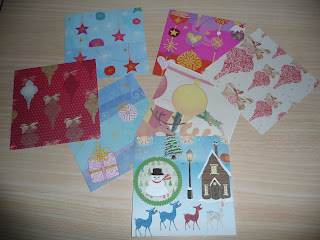 I also glued down at least one of the flaps that come into the centre, as at the time of typing this, I'm not sure that I'm going to bother putting matching images onto the front of each box as I like the papers themselves and the top white section of the box will have a number on it anyway. I decided that the two inner pages looked far too bleak just white, so I printed off two backgrounds from C.A and glued them in. Place the little envelopes three in a row of four rows and glue them down and then put the numbers on; either peel-offs or handwritten. Do it in that order as they do need to overlap a bit, so if you put the numbers on first, they might end up getting covered up. 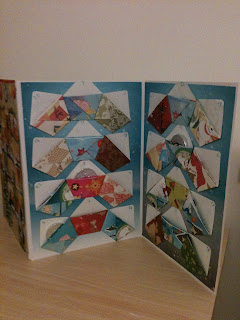 I decided to put pictures on the  back too as I may well end up putting it in the lounge room window, so at least walkers-by can see Christmassy things too.I created these with C.A. Mounting them on mirri board also acts as extra support for the whole thing. 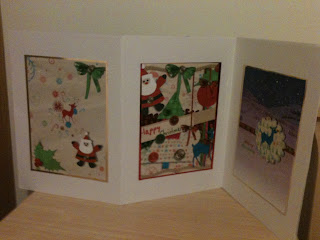 Take care out there
Posted by Diane Warburton at 23:05