After not a very good day at all at the Trafford Centre; a traffic hassled trip to Hobbycraft on the way home and an awful walk with the dogs(refusing to come back to us at 4pm when I'm tired and it's basically dark, is not an endearing feature of theirs), I decided late tonight to do some house building. I'd had calming time by then and thought that I'd try to reclaim some of the day by doing some of the Gingerbread house. This was a dangerous strategy but it turned out ok in the end.
I got into a right mess with the icing as it's not something I've done in a long, long time indeed; thankfully I made the icing up yesterday so no clouds of white tonight. I began by piping the icing along wall edges to fix them together but soon turned to 'plastering' it on. After initially managing to get the four walls up, I tried to put one of the roof pieces on - without success! I then also realised that it would be better if I erected it whilst it was sitting on what I will be carrying it to the party on, so I broke it all up and started again. This time I thought it wise to just do the four walls and leave them overnight to harden and 'cement' together. Maggie helped me at this stage but purely as she was unfortunate enough to walk into the kitchen at the wrong moment and she soon exited at an advantageous time- so much for family fun!

After seeing that the four walls stayed together, I went ahead and did some decoration stuff - all I can say is the piping work is harder than it looks; especially if you don't have a very fine nozzle to do things like the windows and door. I had to buy nozzles especially for this house; hence the visit to Hobbycraft but it was only a basic set which didn't include a fine one. It was quite fun sticking the sweets on and then I found some little iced balls etc type decorations in a cupboard, which is where I got the cute little snowmen from.

Anyway, I'd better go as it's almost ten past midnight and Chris just came in asking if I was actually intending on coming to bed. Here's what it's like so far. As ever, far from perfect but please cross your fingers that it all stays stuck together. 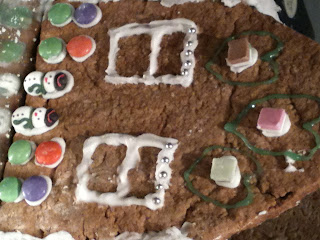 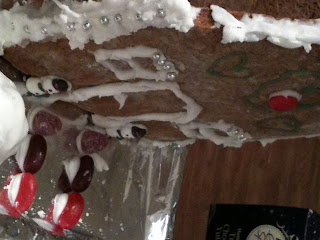 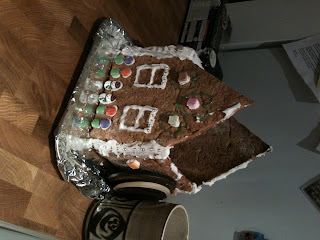 The container and lid were there as support originally and then I wasn't brave enough to move it!

Take care out there
Posted by Diane Warburton at 00:13