I had yet another busy day the other day, trying hard to fit everything in from three dog walks, to taking dogs to groomers to doing household stuff and taking birthday presents to friend's house and very importantly, have tea outside as it was SUNNY! Yes, you read correctly, it was actually sunny and warm from about 8a.m onward.

In between all that, I actually managed to complete the patchwork block below. I had cut the pieces for it the day prior but all the sewing was done fairly quickly on the one day.

The video for this block; 'Birds in the air' was better than the Sherman's block video, as this one actually explained a little better how to sew the half square triangles together. You place the flat end of the cut triangles on top of each other, as shown below and then flip over to sew along the diagonal edge and put the pointed end towards the needle, as that flat end is the 1/4inch seam allowance. It sounds complicated just with words but in the video, it could've been done better in my opinion. 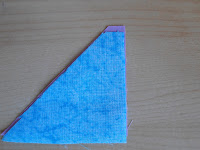 I'm really chuffed with how quickly I did this and the final block isn't too bad; it certainly doesn't stand up to close scrutiny but there's quite a few good seams in there.
I intend on using this block, along with the next three blocks I learn, all in one large cushion cover and it'll go in my spare room/craft room. 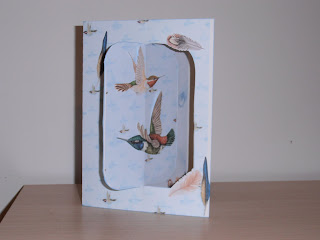 One project which was definitely not done quickly was Chris's birthday card. It seemed to take ages, as it used paper I printed from a cd. When I'd created the K-card base, I then chose the papers and images I wanted to use and printed them off separately and then set to the tonnes of fussy cutting necessary - that might seem like an exaggeration when you look at the card but just take my word for it. 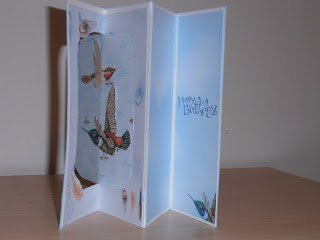 What I should have done was print the design onto the card base first thing before creating it.

Then when I went to make the envelope the stupid 'Spray and Slide' made a right royal mess over the front of it. So what does every good crafter do when a mistake or mess happens? We cover it over; hence the embossed and cut out shape on the front with his name on it and the feathers glued all over. I had wanted to use those spare feathers anyway (yet another printing error), so that wasn't the end of the world for me but I just had to be quite careful where I put them. 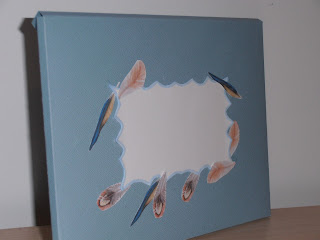 He seemed to like it, so "job's a good 'un" I suppose but I'm not happy with it due to the final product and the time and faff, it took me to make it.

You can't win them all.

Take care out there
Posted by Diane Warburton at 07:00

Email ThisBlogThis!Share to TwitterShare to FacebookShare to Pinterest
Labels: birthday card, Craftsy- 'Re-piecing the past' class