This is my third posting about the sourdough cake, which I'm to call Herman according to the instructions. This is quite a feat, as when I first heard about the concept from my friend Melanie, I laughed it off as a joke of hers.
As I type, he's in the oven with about 15 minutes of cooking left, so I best type quickly.


This is how frothy he was before adding cake ingredients 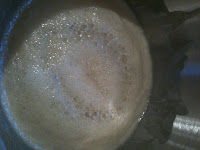 In many respects there isn't alot to say as you just put all the ingredients in the same bowl as you've had your mix in for the last 10 days. I kept my mix in my Kenwood mixer as it has a clear plastic cover for it, so ideal for covering him yet allowing air to get in. So every day I had to stir 'him', I just switched it on. Before you ask, yes I did wash the K-mixer each time. 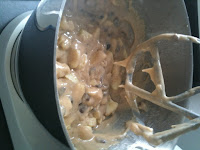 It's not the best looking mix in the world, it has to be said.

There's also rather alot of it: 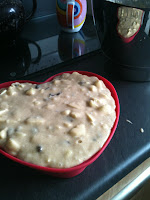 That's clearly nowhere near big enough, so into the cupboard I went to get my only other bigger one. I expect you could use several smaller ones if necessary but don't forget that will affect how much space you have in your oven. 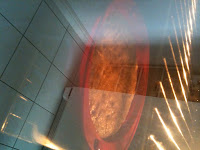 This was it after 20 minutes- looks much better now
....I just need to nip downstairs to check up on it..... house smells gorgeous of cinnamon :-)
It's huge!!
I did enjoy washing up a few pieces (why do I always seem to create so much washing up?!!) and then sitting on the sofa in the kitchen area with a cup of tea, a Cadbury's cream egg and some favourite tunes playing including 'when you say nothing at all' (Ronan Keating), 'don't love me for fun' (Boyzone) and 'inside out' (Bryan Adams). Yes ok, I'm showing my age and these are oldies but they made me feel good and relaxed.
The result of my labours, which seems an extreme word when it's so easy to do: 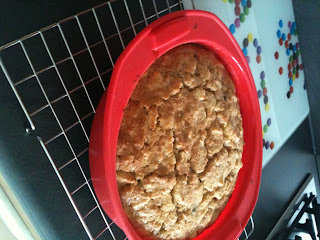 I had the oven at 175c (as original instructions said to have it between 170 and 180) and it was in there for over 45 minutes but I still think it looks rather moist but hopefully by the time it's cooled down, it'll be fine. It's a good job it freezes well though as that's alot of cake, unless I decide to invite half the street round for coffee :-) I think I will invite my friend over though, as she was unable to do this little bit of fun, due to having rather alot on her plate at the moment. She might appreciate the break, the chat and perhaps a smile or two.
Go on, have a go and spread the joy!
Take care out there
p.s it wasn't ok after cooling down. After having a couple of pieces for dessert, I had to put it back in the oven and guess what?! Yes, of course, I left it in rather long. It's not burnt thankfully but much browner than this, which suits me fine as I prefer it that way.
Posted by Diane Warburton at 15:04