Each journey has to start with one small step and this is the step I first took with the new canvas I'm doing. 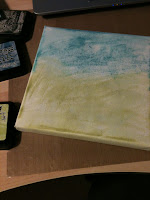 I just rubbed a broken china ink distress pad over the top area and a shabby shutters pad for the grassed area. The intention with this canvas is to follow along with May in the BPC class. I'm not doing a step by step as basically, I can't, as I don't have all the stuff she has. May started hers by just rubbing distress stain over the canvas in a similiar random way and then she rubbed most of it off with a tissue. 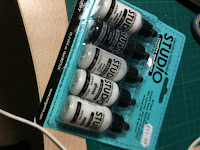 That was in last week's video and this week, as she goes through the selection and decision process about what to do (she basically thinks things through as she's working), she ends up covering over her initial background with book pages. She used PPA glue but suggested that a matt art medium would work. I used that for attaching my clouds; I mixed it in with the white paint, as well as rubbing it onto the canvas area where the cloud was going to go. I don't get it. What's the deal with this art medium? I can't see how it's any different to pva glue - which is alot cheaper! I have a little sample bottle, along with 4 others -
At £10 (don't know why it says £11.99 on the box, as that's not the price I paid for it) it's a very expensive kit, so I can only hope I'll be able to see the point of the gesso etc 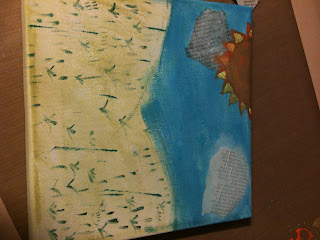 As you can see, I messed around more with things. I tried some paint on the sky; trying my best to make it look patchy as the sky does look. I just did little flecks of paint really for the grass. The long vertical strips were just me messing around with an ink pad and I just pressed an edge onto the canvas and flicked it quickly - it doesn't really work - unless I make them into stems for flowers, a little later on in this project.
This is the first time I've used print on anything - this is a bit of Chris's newspaper, so I had to check there wasn't a crossword on the section I ripped out; although he's been away for nearly two weeks, so it would've been tough luck if I'd ruined his crossword :-) I like the cloud on the right but I think I added too much water to the paint for the other cloud but I can always deal with that once it's dried overnight. I've also sprayed some Perfect Pearls mist all over and it does look sparkly as I turn to look at it now, whilst it's under the light.
I got inspiration for the sun style from a blog of course - http://janiescardsetc.blogspot.com/. Whilst I looked at her She Art pieces, I saw some mosaic effect work on her #10. I've seen a few people do that on their work displayed on the gallery in the BPC 'classroom'. I like it. I think I might try some of that on this piece.
But that's all for another day. I'm off to bed, as Chris will be arriving home around 5/6a.m tomorrow and it's 11p.m now.
Take care out there
Posted by Diane Warburton at 22:57

Email ThisBlogThis!Share to TwitterShare to FacebookShare to Pinterest
Labels: Canvas and acrylic paint