One of my neigbours have had a new baby this week and since I have a day off work today, I've made time to get a card done. Obviously I've known that I would be making a card for a while, so occasionally I've looked at ideas. I bought the Wild Card cartridge a few months ago and there's a great pram ('carriage' as it's called on the cartridge) shaped card on there, so that was my starting point. I didn't need to draw a basic design of my card for this reason but I did jot down notes of pages where certain cuts are and watched a brief video from papataya9804 to set me off on my way. 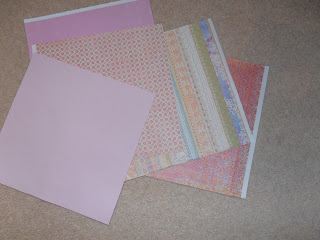 Those are the papers I selected at first to use on the card but even though I find that selection process helpful, I rarely stick to it as I go through the actually making of the card. I haven't seen the baby or the parents to speak to yet but when Chris saw them arriving home (whilst he was ironing I might add; I have to get him doing something whilst he spends hours and hours and hours watching sport!) with the baby and a large pink balloon. That's the reason I went with pink shades at first.
The cuts I used were:
fit to page for the envelope from a 12x12 paper
5.5in for the card base
Liner -5.5in
icon - bow -5.5in
- rattle - 3in
frame - 5in 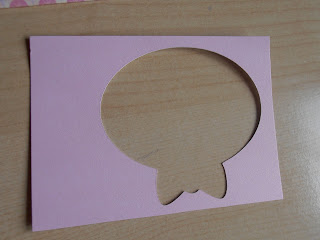 I love it when I can find a scrap of card which is exactly the right size for the cut I want. It often gets me into 'trouble' though, as I sometimes push my luck and the card isn't quite big enough for what I want. It's good to be careful but being too frugal is just silly.

The wheels of the pram were just white to begin with but I didn't like that, as they blended too much with the white of the back part of the card. I wanted to use the blue card I'd used on the bow and the sentiment but I didn't have enough to cut the pram shape again. I decided to draw around the wheels onto the blue card and then cut them out with scissors - job done! I inked them with Stampin' Up's tempting turquoise. 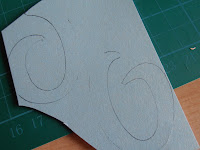 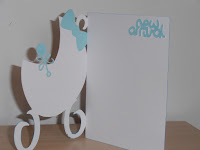 That's that. Card's done during a hideously rainy day - there are benefits to rain after all!


The frame on the front of the envelope was cut twice in order to give me a pink frame with the cream inner. The rattle was cut at 5in and was a 'mistake' from when I was cutting the rattle for the pram, as it's far too big to sit in the pram. I love being able to use 'mistakes too. I still have another card blank, which I cut at 5.5in but quickly realised that the envelope would never fit around it and didn't want to make my own envelope at the time. I can use that though for another card for the next person who has a baby - waste not, want not :-) 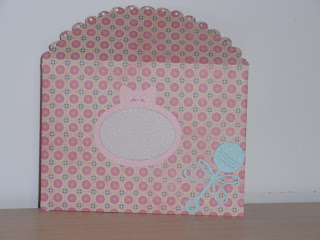 Posted by Diane Warburton at 12:00