Hello there
Today's posting is all about a layout I've done for the BPC class this week. We're in week 4 now, which is scary as that seems like such a long time yet I never get enough time to do as much with it as I'd like/need. This week's topic is pen and paper. Whingeing aside, I did enjoy the:
You do get an awful lot of help each week and on top of that we also get an inspiration email from a well known 'crafter' or artist. This week's was from Julie Fei-Fan Balzer, which I've only just realised that I hadn't even seen - there's just so much stuff, it is easy to miss things. I'll read that once I've completed this post; although it might have to wait until tonight as we're off to the hairdresser at 4 and it's 15.43 now, so I'd better get a wriggle on :-) We get a new topic tomorrow, so I like to ensure that I've done at least one project to 'hand-in' before the end of the week. And I've done it!

It's taken way longer than it should've done but hey, you've heard me say that before. Last week's layout was about the dog's first birthday, so this week I decided to scrap photos of their first day with us. Just finding the photos was bad enough as they're on several computers but Chris's are the best but he's away in Morocco at the minute, so I can't get them, which caused delays of course. I found some on Maggie's computer but then the printer didn't print one out properly and I'm not convinced with one of the photos I've actually had to use.
It started life like this: 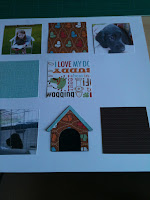 That clearly is not good enough. I soon got to thinking about the neatness of it, so thought it best to put the individual 3" squares in a skewiff manner. I also thought that I need to 'dirty' it, so I got my vintage photo inkpad out and got to work on the edges. Come on Diane; you need rougher, tougher action to represent the impact the dogs had on the house and us, so off I went to get my scissors and roughened the edges; tore a bit and made a 'dog-ear'. I was on a roll, so I continued with the blending tool all over the paper - this was fun and 'freeing'. I had contemplated putting a paper background but it would've been far too busy in my opinion and I would've had to matt the photos and that just didn't work for me at all. 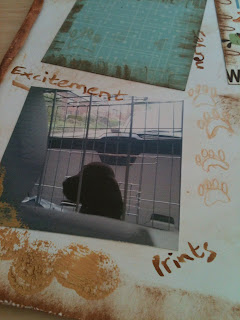 May had shown a video about dampening the edges of your paper after inking it and rolling it to give a vintage/aged effect. Off I went to put water in a little bowl, got a paintbrush (yes, I have those in my room now, waiting eagerly for a friend's painting class I've been invited to) and had a great time doing that and then re-inking over it where some white appeared from the back - good fun!
I cut the dog house from Create a Critter at 3". I used the same papers as I had already to try to calm down the pattern influence.
I used my gold Dabber in three places to try to form the triangle 'linking' effect I have heard people like Melanie Heaton talk about. If you have items creating the triangle, it is meant to connect all the pieces into a uniform appearance. 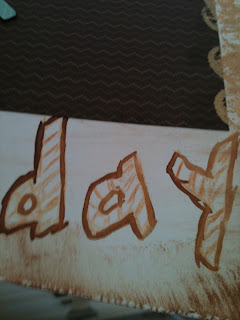 I drew some paw prints, as that links in with this week's theme of pen/pencil and with my layout of course. Once I'd done the title in pencil, I didn't think it was clear enough, so I stamped my vintage photo pad onto my craft mat, sprinkled some water onto it and then put my paintbrush into it and painted round the letters to help highlight them more. I enjoyed that, so off I went writing different associated words all around the layout - good times! 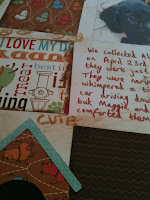 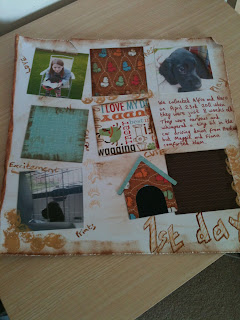 I decided to write the journalling freehand on the page as anything else just didn't feel right.
That was it. Done.
I enjoyed it and I've been to chat with some crafty friends tonight, so I'm happy. It was meant to be craft and chat but chat basically took over as we hadn't had a get together for a while. I also had a very productive chat yesterday with Linda, who is running The Crafty Network, to support craft businesses
﻿
All these things help keep me happy and knowing that the world isn't all full of negative, horrible people; there are lovely, creative, friendly people too. I need to keep being reminded of that for my well being.

Take care out there.
Posted by Diane Warburton at 22:50