Very fiddly at first but then I went on to make four more!


This one is a result of downloading the May Member's free download papers from Crafter's Companion. They show three examples of cards which can be made from the set, so I basically copied one as well as I could. The fiddly bit is all the cutting out necessary -I'm spoilt with my Cricut evidently; it's a hard life but someone has to do it! 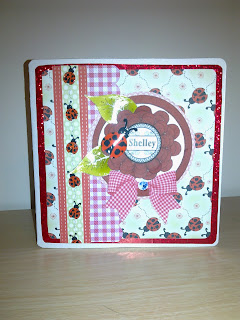 I'll start from the front and work back through the layers of this card to explain some of the additional items/embellishments. The shiny ladybird is from the papers and coated with Glossy accents as are the little ladybirds going up the strip on the left, the leaves and the gem stone in the bow. The word Shelley was printed on Safmat. The lacey effect circle frame behind the red ring supporting the bow, was made with Craft Artist and the brush effect; I created a basic circle shape first to the required size and then went round that with the brush at the thickness I wanted and printed it out - maybe Craft Artist isn't so bad after all :-) The red checked paper was cut with the help of my Gypsy as I've created a scalloped rectangle on there which can fairly quickly be resized for whatever purpose I want for it and I love it! The red shiny paper was from some old saved wrapping paper that I have hanging around and it frames the front very nicely - re-using is a love of mine too.
Right, better dash as the pups should be well awake by now but they're not crying, bless them; they're so good at certain things. And yes, so bad at others - such is the way with pups. They had to go to have another injection today but they were good as gold basically, so best go see to them.

I hope all that makes some sort of sense to you.

Take care out there
----------------------------------------------
May 29th 2011
That was the original post but now I've finished off 95% of the printout, so I'm chuffed to bits as I hate wasting. I'm not sure what these cards will be used for so there aren't any sentiments on them really. I'm so proud that I designed them all myself with what I had left and a few extra bits I made up. I also used the Ultimate Pro to emboss the trifold's wavy line down the middle of the second panel on the checked paper. I hand cut the red shadow behind the 'Just for you' label on the third section of that card. The little ladbybird embellishments on the envelopes and the trifold card were cut from Create A Critter. 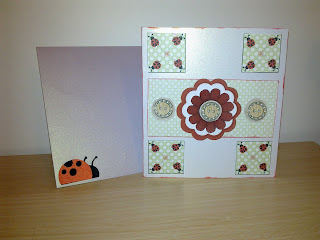 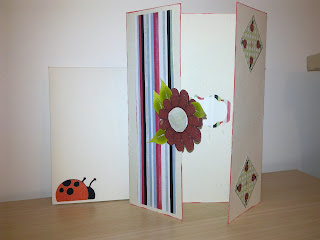 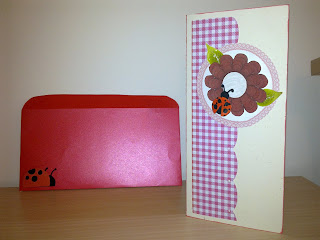 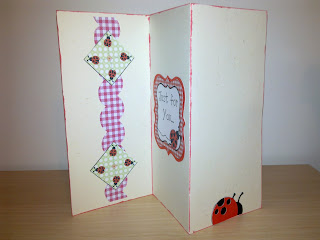 May 30th﻿
Just found this card in my bag of cards too, which I'd forgotten I made straight after making that original one. I think I made one for mum too so there  has been a stack of them from the one print out of the papers, which is excellent value. Some are better than others it has to be said and the card I used on the gatefold and trifold is very thick so I had a bit of a job getting them in the envelopes I made but this last card is made from centura pearl and the envelope is card as well. Sentiments will be added when the occasion arises. 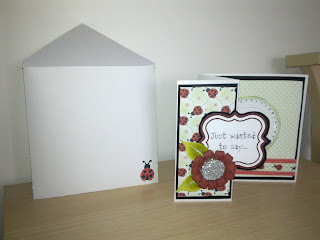 Posted by Diane Warburton at 14:32