I'm rather excited at the fact that I'm going to the Children in Need Manchester Rocks concert tomorrow night with my daughter and my mum. There's a host of stars appearing including Michael Buble, whom I've tried to see several times, especially with an old friend Sue but it always seemed to be sold out by the time I saw anything about it. I only found out about the concert last week as I got an email from Ticketmaster saying that there were still some tickets available, so I had to make a very fast decision to buy two. Later on, after talking to mum I managed to book her a seat on the same block and row as us. We can only hope that people won't mind moving along one seat, so that she can sit by us. Maggie's keen to see JLS despite the fact that she's seen them before. I'm not sure why mum said she was keen to see Lady Gaga (I'm dreading it)?!!

Anyway, to get into the fun of it all, I've made a banner for us to hold up when we're there. Unfortunately I haven't got any fusible web to cut the letters out on my Cricut, so I had to hand draw the letters and cut them out and then sew them on, which has taken me two and a half hours, which is far too long considering the use the banner will get. I had other things to do in that time but it's still far longer than I would've liked. I really could do with a machine that can do freehand embroidery as that would've made going round the letters, so much quicker. 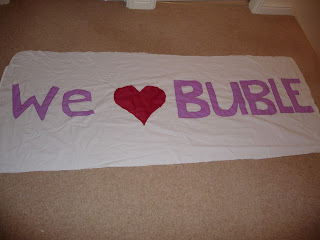 Let's hope he sees it and blows me a kiss!!
Take care out there﻿
Posted by Diane Warburton at 22:22

Email ThisBlogThis!Share to TwitterShare to FacebookShare to Pinterest
Labels: Buble