A brief (did I hear you sigh a sigh of relief?! ) little entry to say how pleased I was to actually win something recently, other than the Lottery but that was only £10 so not too exciting. I was watching Jennie Rayment on a show on Create and Craft t.v channel and she offered this book as a prize for sending in an email to the show. People normally only win a card (although I use the term 'only' guardedly as I've won one of Nancy's cards a couple of years ago and it was brilliant), so to be offered a book by such a talented lady was too good a chance to pass by. I sent an email and a photo of that bag I made using the Clover templates (see previous entry) which she had demonstrated a month or so ago and my email was read out and the photo shown. Unfortunately I actually sent in the incorrect photo which wasn't such a good shot of it but hey ho, no matter. Jennie also signed the book exactly like she said in the show she would; it's little things like that which show people's true personality. Jennie is a real character; full of confidence but she's obviously excellent at all things sewing and very knowledgable. This is a book about patchwork projects.The book has step by step instructions with photos, which is perfect for me. There are loads of great projects in there but the one which stands out for me is the one she calls Scrappy Zappy Do! It's probably the hardest in the book, so I'll see if I ever get time to do that. 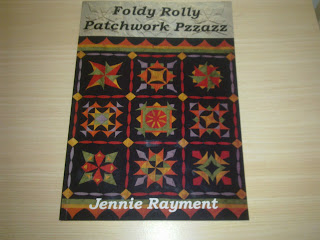 Anyway, I'd better stop now as I promised this would be brief :-)
Take care out there﻿
Posted by Diane Warburton at 00:04